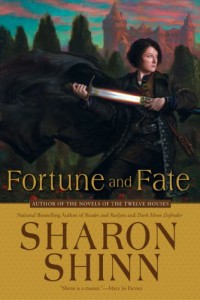 I’m embarrassed to admit I’ve never read any of your novels before. Given how long I’ve been a fantasy reader, I don’t know how I managed to accomplish that. I hope my blogging partners here at Dear Author won’t hold it against me since several of them love your books. Better late than never, right?

To be honest, this probably wasn’t the best novel of yours to start with. First of all, it’s the fifth installment of an established series. While I didn’t get lost or confused at any point in the book, I could tell I was missing a lot of texture and richness when it came to the characterizations and relationships. I don’t think the book suffered because of it but I feel that people who’ve read previous books in the series would have gotten more out of it than a new reader like me would. That’s a just a theory though. I’d be interested in hearing from any other new readers who started with this book and what they thought about the presentation of characters and events.

I liked the idea of this book. So many fantasy novels are devoted to the build-up of society-altering war. While I doubt I’ll ever grow tired of well-written books exploring that subject, I also like reading about what happens after the war, especially to those who’ve been left behind or who have survived. Wen epitomizes the broken soldier: she suffers from survivor’s guilt because she failed to protect the king she served. Her entire life was devoted to being a Rider and with her failure and the king’s resulting death, she lost her purpose in life. These days, she wanders the countryside without purpose, helping random people in need in order to atone for her failure.

In many ways, this book is a recovery story of how Wen heals the wound left on her heart. It’s true that there are 49 other Riders but Wen was of two guarding the king at the time he died. I enjoyed the parts devoted to this plotline the most, in which Wen finds herself stuck at Fortune, trying to cobble together a guard to protect the life of the much-hated Rayson Fortunalt’s daughter and heir, Karryn. I love stories like this: forming an unit, training together, and making them a strong fighting force. I realize it’s mundane and not at all the flashiness you’d expect from the fantasy genre, but those small details combined with Wen’s struggle to overcome her self-loathing made it work for me.

I also liked the bits we saw of Karryn, who has to fight against the legacy left behind by her despised father. While a part of me suspects we will eventually see a book about Karryn and Ryne in the future (and I wouldn’t object to this), I enjoyed how you gave us a character who tried to do the exact opposite of her father and become the sort of noble that engenders loyalty and devotion among her followers and people.

On the other hand, I thought those two storylines were overshadowed by Cammon and the others. I know the previous books were about these characters so maybe this was meant to serve as a “Hello, again” to them but since I haven’t read them, I wasn’t interested. And maybe because I haven’t read them, I felt Cammon’s storyline was overindulgent and unnecessary. I don’t think it added much to the book, frankly. Even when we get to the inevitable meeting between Cammon’s group and Wen, I still don’t think its importance warranted the number of the pages it received.

I’ve also heard from Jane and Janine that your books tend to be romantic as well. I’m going to have to assume this book is not one of the best examples because I didn’t find Wen and Jasper’s burgeoning relationship romantic. I thought it was interesting in the beginning with their nightly meetings, but the development and culmination didn’t quite live up to the expectatations I’d formed. Perhaps that was my mistake for making assumptions and having high expectations.

While this book didn’t make me fall madly in love with your work and want to rush out and buy your entire backlist, it did succeed in making me interested about the previous books in this series. I do think, however, this is a book best enjoyed by existing fans of the Thirteen Houses series and best skipped by new readers — at least until they’ve read the previous installments. C+