REVIEW: For Your Arms Only by Caroline Linden 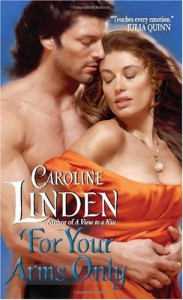 I came away from this book thinking that I should have liked the story more than I did and I wasn’t sure why.   Your prose is good, as always.   You have thoughtful characters.    I liked the premise – the story of a man whose honor was totally stripped away by a false accusation and how his life is redeemed.

Alexander Hayes has been dead to his family for the last five years.   He was reported to have died on the battlefield and letters were found in his affects containing correspondence with the French.   He was denounced as a traitor by Wellington himself.   Alex was not a traitor but discovered that he was suspected when he found a friend of his on the French countryside.   Alex was given the opportunity to spy for England so he changes his name and remains dead, cut off from his family, his friends, his home.   In the meantime, he seeks evidence to clear his name.

Then his brother dies and Alex inherits the title.   He must return home.   There he finds his beloved sister can’t even sit in the same room with him and tells him that he would have been better off to stay dead.   He displaces his cousin, a good man.   The entire village, no, the entirety of England, believes him to be a traitor.   Only his mother is filled with welcome.

Cressida Turner and her widowed sister, Callie, live in a small home near the Penford estate, the home of Alex.   Their father has gone missing and the family funds are perilously low.   Alex has been discharged by his superior to look into the matter and while Cressida first views Alex with suspicion she realizes that she has little choice but to allow Alex to assist her.

Both Alex and Cressida are understated characters.   Alex, in particular, seemed to have an inexhaustible supply of patience, particularly with his sister Julia.   When Alex does have a strong emotional response, it is all the more powerful because of the contrast.

I could see how the two were well matched.   Cressida, like Alex, was not particularly flamboyant.   She was the plainer of the two sisters and had not been able to make a match.   She’s resigned to be a spinster.

The story was not told in a linear fashion with the present time frequently interrupted to move backward to unravel the story about how Alex became known as a traitor.   I found that the backstory was interesting but really provided nothing to advance the story.   It didn’t provide me with any greater insight into Alex as a character.   It had nothing to do with Cressida and there was nothing in the flashbacks that provided keys to unlocking the present day mystery.   It fell a bit like filler to me.

There was early mental lusting by both Alex and Cressida which didn’t seem to match the overall tone.   Because both Alex and Cressida seemed to be restrained and because their initial meeting put each other at odds with one another, it was jarring to read about the tightening of Alex’s loins just looking at Cressida or Cressida’s thrill of appreciation at Alex’s blue eyes and sinfully handsome face.

I wanted to see more of how Alex dealt with the fall out of his treason.   Was his sister unmarried because of it?   We see small glimpses of it in his local church, but other than that, most of the story takes place at either Penford or Cressida’s home and the isolation makes you feel like there is no fall out, other than Alex’s sister’s issue with it.

Again, I liked the tone and I did like the characters but the whole story didn’t mesh well for me. I couldn’t connect emotionally. C

This book was provided to the reviewer by either the author or publisher but I did purchase an ecopy for myself. The Amazon Affiliate link earns us a 6-7% affiliate fee if you purchase a book through the link (or anything for that matter) and the Sony link is in conjunction with the sponsorship deal we made for the year of 2009. We do not earn an affiliate fee from Sony through the book link.