REVIEW: Find Me by Debra Webb 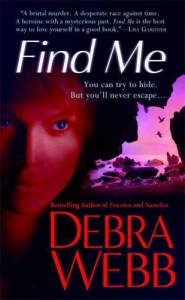 Unlike JT Ellison’s book I recently read which was a suspense/thriller with romantic undertones, this book has a pretty good balance of romance and suspense due to the time spent developing the relationship between Kale and Sarah and the internal conflicts they struggle with before they can become a couple.

Sarah Newton is a truthteller. She is a journalist for a magazine that serves to solve crimes, particularly in small towns, by exposing everyone’s secrets. She has been asked by Youngstown, a small Maine community, to look into the brutal murder of one young woman and the disappearance of another. Kale Conner is a businessman who, as low man on the town council’s totem pole, is picked to chauffeur Sarah around town. Initially Kale resents Sarah. After all, trouble follows her wherever she goes as she targets the members of the community, unearthing long held, and very dark, secrets.

Kale refuses to believe that anyone in his community could do such unspeakable acts and bristles at Sarah’s unwillingness to consider the stranger theory.

Perhaps the reason that Sarah is so good at ferreting out the truth is because she has such horrible secrets herself. Her past has made her into what she is today, a defender of victims, but she worries that her past is not yet done remaking her.

There are two central themes in this story:

First, does one’s genetic makeup predispose you to do violence toward others. While I appreciate the two sided look to this question, I felt that it didn’t fully carry it out or that the underpinning of the supposition was based more on the resulting action than the cause of the action. In other words, there was no discussion that someone who undertakes to kill people suffers from some mental disorder, such as being a sociopath. There was no discussion of the genetic inheritance of mental disturbances, but rather the focus was on simply can the urge to kill or be a killer. In discussing whether killing is a heredity trait, I felt the lack of inclusion of any mental or psychological aspect made the question superficial.

The second theme in the story is that everyone has secrets and some will do terrible things to keep them quiet.

This is a fast moving book and the suspense is very good. The relationship between Kale and Sarah is well explored for a romantic suspense as Kale struggled with his familial obligations and Sarah struggled with the fear of being close to anyone. While I was reading the story, I was pretty engrossed but at the end, the story fell apart for me.

I felt that the clues given didn’t measure up to the identity of the perpetrator. The motivations of the perpetrator didn’t match to the villains’ scenes. There was a total glossing over of someone else’s wrongdoing in the story. It was as if because there were no negative repercussions, then the act itself was unimportant.

Because of my disappointment at the end, I’m going to give this a C. It would have easily been a B if the villain had matched up better with the clues but I felt like I had been cheated in that area.

This book can be purchased in mass market from Amazon. No ebook format. St. Martin’s Press has a probe or ebook format from the Sony Store and other etailers.