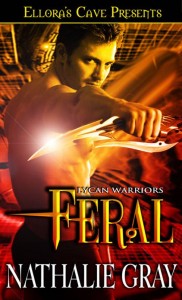 I can’t recall why I wanted to read a book of yours. Was it a comment you made? Somewhere? It’s hard to say. I mentioned one night on Twitter that I was going to buy one of your books (Damnation) but my friend, Nicole of BlogHappy, twittered back that I should try Feral. So I bought both books and here are my somewhat incoherent thoughts. I have to admit up front that I don’t know how much sense my review will make because I was hardly able to articulate why I didn’t love this book.

First, this book is a space opera in the vein of a Linnea Sinclair or perhaps, Ann Aguirre. Spy and assassin, Eva Grigorevna Serova, is sent on a mission to retrieve a digital transmission. She doesn’t know what is on the transmission, only that she should find it and bring it to Prime Minister Vonatos of the Global Alliance of Nations. Oh, and she should eliminate the entire team that she is working with once the digital transmission is recovered.

The team is comprised of a number of lycanthropes. Lycanthropes are deemed to be viscious, sub-human types.

Poor buggers. And all because of some long-dead mad scientists’ dream of creating tougher humans for the harsh environments outside Earth. She wondered if they’d lived to see their "creation" become a hush-hush weapon, a state shame. And now a menace.

Despite Eva believing that these lycanthropes were a mad scientist creation that she deems to be “poor buggers” she has no problem recognizing that the lead of the team, Dex Solomon, stirs her libido. This seemed a bit off to me. If Eva believed, had a bias against lycanthropes, as equal members of society, would she really be so willing to shed her clothing and engage in the beast with two humps with the science created animal? I know I am supposed to believe that Eva is without conscience, but wouldn’t she have some hesitation to being physically attracted to a lycanthrope?

In any event, Eva finds the time to bed Solomon, find the chip, and then face the dilemma of executing her orders. In the same space of time, Solomon discovers there is a traitor in their midst and while he is off humping Eva, the mission is going to hell in a handbasket.

Eva, ironically, is more feral than Solomon. Initially she’s willing to do anything for survival but she is in no way heroic from the start. After all, she is willing to accept any assignment regardless of how morally bankrupt it is and not for any reason such as patriotism or revenge, but just because. It’s not that I found Eva to be dislikeable, but that her amoralness is so suddenly transformed. And her amoralness never really fit with being part of a structured governmental outfit. Did she have any belief or direction? Was she merely an automaton? a weapon of female destruction? I couldn’t get a fix on her other than she liked her sex to hurt.

As for Solomon, he was standard hero issue. A big bad alpha who didn’t like to hurt women. Seriously, his entire character arc was devoted to his fear of hurting Eva, particularly when they were sexxing it up when he was shifted, even though there was plenty of evidence that Eva liked it when he went shifted. Eva, with her moral ambiguity, was far more interesting than Solomon, a hero who has starred in an overwhelming number of romances before.

Another thing that I found curious was that there were quite a few action scenes in this book but I found myself bored. I struggled to explain this to even myself so I don’t know how much success I’ll have here. I felt disconnected to the fight scenes and many times, I wasn’t even sure what had taken place, only that after the smoke cleared Eva and Solomon would run off to burn up their adrenaline.

Nicole really enjoyed this book and it seemed to have all the elements of a story that I would like too. I’m still reading Damnation since I already bought it and everything. C

This ebook can only be purchased at Ellora’s Cave.