Review: Duking It Out (Royal Powers #1) by E.J. Russell 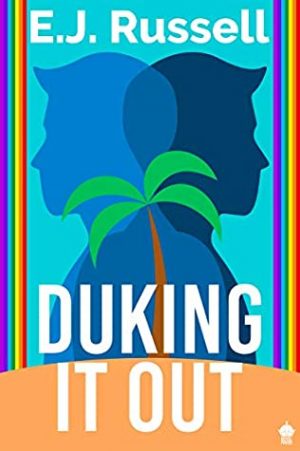 Royal dukes from rival countries, shipwrecked on a deserted island. The grudge match of the century—or a love story of super-heroic proportions?

Sander Fiala, Duke of Roses, is fourth in line to the South Abarran throne, even though his rogue power earned him the nickname “The Monster of Roses” and got him banished from the Castle. But right before he’s about to set off on his annual birthday sailing trip, the Queen asks him to meet with the notoriously volatile North Abarran Duke of Arles.

Tarik Jaso, Duke of Arles, expects the worst from people because—let’s face it—people are the worst. His superpower bombards him with any and all electronic transmissions, which…yeah, people suck. So when he’s attacked and wakes up in the cabin of a stranded boat, he knows he’s royally screwed. Because the man looming over him—the man he’d gone toe-to-toe with right before the attack—is the infamous Monster of Roses.

Tarik is positive the Monster is behind his kidnapping. Sander is sure the whole thing is Tarik’s fault. As they work toward rescue, Tarik realizes that the disturbingly hot Sander is no monster, and Sander discovers that Tarik’s temper masks a caring soul wrapped in a cantankerous (though undeniably sexy) body.

For their burgeoning connection to endure, they’ll have to duke it out with political factions, dark conspiracies, and centuries of traditions that keep them on opposite sides of the border.

But first? They have to get off this damn island.

Duking It Out is a 46,000-word M/M enemies to lovers, opposites attract, superhero rom-com, featuring Only One Bed, a grumpy duke who should know better than to jump to conclusions, a self-doubting duke who’s good with his hands (heh), gossipy seagulls, competent assistants, a guaranteed HEA, and (unfortunately) capes.

I got this book as a gift from good reads Christmas book exchange. The blurb sounded fun. I love superheroes. Unfortunately the way story started I felt that I missed half a book. Made up countries, many people with many names and apparently they have super powers. After I finished the book I went looking and found out that this is the first book in the series which you can find on KU. Apparently several authors are playing in the same universe. I have no problem with the series written by several authors, but presumably this is the first book in those series and I felt like it should have started more clearly for the reader than it did for this reader.

I actually love when an fantasy/SF author throws me in the middle of the unknown world and then describes it rather than doing an info dump and maybe, just maybe, the world acquires depth in the next books, but so far what I saw were a couple of fun concepts thrown together and that’s about it. And I was still confused.

Also, enemies to lovers are my favorite romance trope if well executed. And I don’t even mind that the men stopped being enemies very fast – because really them thinking of each other as enemies was mostly based on lack of knowledge and misunderstanding. But today enemies, tomorrow lovers did not quite work for me. I get that this is a novella and sometimes Insta love works for me in novellas, so this was not it. I think I could have easily bought them coming back as friends, maybe starting to fall in love, don’t know.

Also, the murder plot really should have been a bit more suspenseful than it was. It frankly felt silly.

I did like them together, that’s why giving it a C, but overall this was a messy story for me and I doubt I will be coming back to this series.

→ Sirius
Previous article: REVIEW: Explorers of Deep Time by Roy Plotnick
Next Post: 2021 Covers: The Hot…and the Not