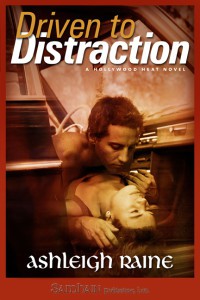 I think someone brought this to my attention because I mentioned I liked sports books.   I never really equate sports and cars, but I suppose it falls under the same rubric of entertainment.   This story is a car book and a movie book.   I liked the movie aspects more but for a car enthusiast, I think this book would be a thrill.

Blaina Triton is an up and coming stunt double whose first love, cars, leads her to stop one night in Encino when she spies a dark purple 1970 Barracuda convertible with "complete with hard-body owner leaning against the fender." The two exchange heated double entrendres under the guise of referring to his vehicle, her tools, his tools, her engine and so forth. The first chapter does a good job in conveying the tone of the entire book. In other words, if the reader likes the first chapter, I think she’ll like the book. If the auto puns, high sexuality, and Hollywood setting doesn’t appeal, then this book should be passed.

First, I have to confess to not being much of a car buff. All the chatter about the differing engines and torq and cars made my eyes glaze over. It was too much, in my opinion. For a car enthusiast, this was probably heavenly but for me, who doesn’t even like to put her own gas in her car, it seemed like overkill. Particularly since it seemed like all the innuendo was car related: "How fast do you like to go?" "Why don’t you take me for a test spin and find out?" I was also taken aback by the fact that they had sex on the hood of one of the classic restored cars.   I do admit to watching Top Gear and mildly being interested in the car shows that Ned watches and I get the feeling that some of those guys don’t even like you to breathe on their custom cars let alone allowing someone to roll around and secrete on them.   That seems like a no no to me but again, what do I know.

Blaina is set to work on Dangerous Intentions, a high octane (sorry I couldn’t resist my own auto related pun) action flick. She’s excited to work with the famed Jay Williams, expert stunt actor and currently the stunt coordinator for Dangerous Intentions. Blaina feels like her world is coming into perfect alignment. She had great sex with a fellow car enthusiast, has a date for the following week, and is set to start filming with a legend in the stunt community. Seriously, what could go wrong?

If you didn’t see it coming in the first chapter, I think it is no spoiler to reveal that Jay Williams is Mr. Hardbody and he has a ‘no relationships on the set’ rule due to some past loss.   Despite that every part of Jay wants every leather clad inch of Blaina, he’s not willing to break his rules to sleep with Blaina again. The problem isn’t Jay’s rules exactly; it’s that in an effort to shut Blaina out, he acts like an asshole. I mean, since when does ‘no sleeping with you’ have to be articulated with a tone of dismissive authority.

I know that having Jay act like a prick is all part of the setup, but it doesn’t mean I have to like him or his attitude. I also wondered why Blaina would continue to be attracted to Jay after he treats her like crap. It doesn’t appear in the early parts of the story that Jay has anything going for him other than being good in bed. But Jay must really be good in bed because despite his behavior and his rules, the two can’t keep their hands off each other.

There is quite a bit of screen time devoted to happy couple Sam and Connor (Sam is a chick m/m fans) so they must have starred in a previous romance story.   I felt their bliss was inserted just to interest the reader in their story rather than adding much to the story of Jay and Blaina despite Conor being the headline actor of Dangerous Intentions.

My favorite parts of the book were the action/stunt scenes. These are described with great detail and it was a nice "insider" look on how the best parts of an action film are made.   In summary,   I liked Blaina quite a bit. Thought Jay was a jerk. Rolled my eyes at least one sex scene (a flashlight, really?) and I didn’t really understand how Jay’s loss and reputation regarding his "no relationships on set" wouldn’t be hot gossip that everyone knew within the industry as so much of Hollywood seems like high school.   C

This book can be purchased from Samhain in ebook and print formats.