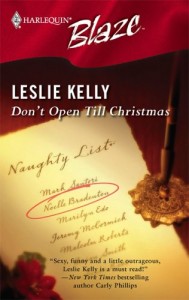 I’m not big fan of holiday stories so one featuring two Christmas haters is probably perfect for me. There’s something deliciously ironic about the self referential nature of the story and the characters attitudes toward the holiday. It seems to me that they would hate Christmas themed stories.

Noelle Bradenton overhears a man and a woman in a dressing room having a very provocative conversation and assumes that they are having sex. Then the man with the sexy voice exits the dressing room and accidentally falls into her room. Their eyes meet and a zing occurs; they kiss but the saleswoman interrupts their interlude and before they know it, Noelle and the sexy dressing room guy are separated without getting the others’ name.

Mark Santori, the aforementioned sexy dressing room man, is a Chicago detective, and by happenstance meets Noelle again when the youth and woman’s shelter where she works is robbed by a Santa and Mark is sent to investigate.

Despite the seemingly ridiculous dressing room setup which is actually addressed by both Noelle and Mark (i.e., Mark confronts her with about kissing him if she really thought he was having sex next door with another woman, telling her that she was “really twisted.”), their meet and greet works. There are other, far fetched concepts in the book that required larger leaps of faith – much of it having to do with the whodunit aspect of the story.

In the beginning, I thought that the sex scenes read very exaggerated. I think that the slow motion way of describing the scene worked to make it more clinical than hot. I didn’t find this to be true toward the end of the story when the couplings tend to appear more spontaneous.

I found Mark’s character to be described inconsistently. He self maintained that he   didn’t want to be in a relationship (thus furthering the conflict) but his internal narratives were belied by his near constant pursuit of Noelle and his quick movement from “I want to have an affair” to “I have feelings for you” stage.

Noelle, having been hurt badly from a previous relationship, wants to only have anonymous sex with a stranger (no thought to how dangerous this might be). Mark plays that role for her, trying to ultimately convince her to give up the artifice.  Nicole struggles to remind herself and Mark of the purely sexual nature of their encounters when her nature is to nurture and to nest.   This was the more interesting part of the story.

As I said previously, the latter half of this book worked better for me than the first half.    C+

This book can be purchased in mass market from Amazon or from the Sony eBookstore.