REVIEW: Daughter of the Flames by Zoe Marriott 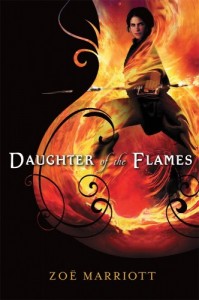 Your book came at exactly the right time.   I’m a little burned out on paranormals and have been looking for a change, so your young adult fantasy was much appreciated.   I just wish I could be more enthusiastic about it because it contains many elements I generally like in this genre.

Zira was raised in a mountain temple, training in the martial arts to become a warrior priestess.   But on the eve of her sixteen birthday, her adoptive mother tells her the truth:   Zira isn’t really Zira.   Zira is actually Zahira, the sole survivor of their country’s former ruling family.   A decade ago, a neighboring country invaded and seized control of their homeland after killing the rest of the ruling family in a fire.   And when a series of events causes the only home she’s ever known to be destroyed, Zahira has no choice but to lead the temple survivors and face the foreign usurper currently ruling her country.   Unfortunately for her, this man also happens to be her uncle.

In many respects, this is a familiar story for the fantasy genre, young adult or not.   Our main character is an orphan with no memory of her past.   In fact, the amnesia is caused by the divine touch of the fire goddess they worship, so Zahira is blessed by a deity too.   And as is usually the case in books like this, it turns out Zahira is actually the long-lost heir to the throne, who carries the oppressed people’s hopes against a brutal dictator.   I’ve read many stories with that premise, so I wasn’t thrilled with this aspect.   I’m not saying it can’t — or shouldn’t — be done, but it takes an exceptional take on this classic trope to get me excited.

On the other hand, I liked that Zahira was raised in a temple and was planning on becoming a warrior-priestess.   I do wish Zahira got to use her martial prowess more often though.   It’s used during all the key turning points in the book, but there were other moments where I thought that she wasn’t acting like a girl who’d been trained since childhood in the martial arts.   In that respect, she felt a bit inconsistent to me.   I also would have liked to have seen her faith explored more deeply.   For someone who’s been touched by fire and raised in a temple, I didn’t really get a good sense of the religion and how it affected her outlook on life.

I enjoyed the idea of her relationship with Sorin.   It was a nice look into the complications that arise in a situation where one country is occupied and ruled by another, and how these things leave lasting effects on people.   Zahira herself is a product of both the native country and the invading country.   Her parents were married to ally their two nations, which makes her uncle’s later betrayal all the more heinous.   But she grew up not knowing this, so she’s lived most of her life hating them when it turns out she carries their blood herself.   Sorin comes from the invading country but grew up in the native country, so he’s more accepting of their culture and customs than his peers.

I also liked how you matter-of-factly presented a marriage between them to be one for a political alliance.   It’s not as common as you’d expect in fiction, especially when so many fantasy stories are ones about oppressed countries rising up against their totalitarian invaders.   I thought the initial awkwardness between them was very realistic.   They didn’t really know each other.   Zahira’s home had just been destroyed.   Sorin was on the current ruler’s hitlist.   Their marriage was born out of political machination and desperation.

By the way, thanks for setting your story in a world that wasn’t a generic medieval pseudo-European society.   I’m not entirely sure but I think I detected some clues in the cuisine and names to hint that this world was Middle Eastern influenced?   I will admit that your descriptions of the food made me drool — no generic stew and stale bread here!   It’s curry and prawns and dates.   Okay, maybe I’m showing my foodie side here.

I’m torn on the topic of the villain.   I appreciated the fact that he wasn’t portrayed as an evil cardboard cutout because I think we’ve had enough of those.   But I also can’t help but think that he swung in the almost-as-clichéd direction of the absolutely insane villain.   He wasn’t evil for the sake of evil, and while that was good, he was also a villain who .   For better or worse, that’s another one of those villain traits I tend to associate with authorial shortcuts.   You know, the villain kills puppies, the villain abuses children, things like that.   It was a sad portrayal and one I think that is believable because to be fair, the antagonist wasn’t .   What happened is entirely possible.   However, as it was only the villain who and not vice versa , I’m afraid it fell into the clichéd column for me.

Finally, I can’t help but think I would have enjoyed this book if it’d been longer.   Many things didn’t delve as deeply as they could have.   This really could have been a powerful story about two cultures meeting, one being oppressed by the other, and then the aftermath in which they learn to live with one another, but I didn’t feel like I got it.   I also would have liked to see more about Sorin and Zahira in the aftermath of the assassination attempt.   I think the condition in which the attack left Sorin would have affected their relationship, and we didn’t get a chance to see that.   Ditto on Zahira spending time with the villain, especially since the climax left me cold.   I understood that it was meant as a redemptive act for the antagonist but it made things conveniently easy for Zahira at the end and I felt cheated.

Good job with the misdirection about the identity of the spy though.   I went with the obvious choice, and it turned out to be someone else entirely.   C

This book can be purchased in hardcover from Amazon. No ebook format.