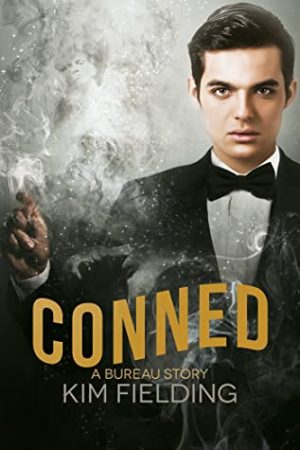 World War I veteran Thomas Donne is new to San Francisco. Always a stoic man, shell shock and a lost love have nearly turned his heart to stone. No matter–a private eye has no room for softness. Almost broke, he takes on what appears to be a simple case: finding a missing young man.

As a magician and medium, Abraham Ferencz cons his audiences into believing he can cheat death and commune with their dearly departed. Although his séances are staged, the spirits are very real, and they’ve brought him almost more pain than he can bear.

When Donne’s case becomes complicated and the bodies start to pile up, he and Ferencz must fight their way through a web of trickery and lies. The truth is obscured by the San Francisco fog, and in their uncanny world, anyone can catch a bullet.

I knew that this was a prequel of sorts to the Bureau series, which I have not read . The author however said that it could be read as a stand-alone, and I loved several stories set in this era, so I decided to give it a try. Intellectually I knew that it was a well-written book, but it just did not quite work for me.

First and foremost I just did not feel that I was observing San Francisco of the late 1920s. I know there were a few descriptions but overall the author just did not give me enough to immerse myself in the era. I always value characters and plot before anything else in my romances, but I love the well done settings in the historical romances and I missed one here.

The story was a little strange and I am not talking about the Bureau. In the last, should I say, third of the book the author tells us how the Bureau was formed and the main plot connects to Bureau origins. It was very easy to understand. The story of Abe and Thomas, on the other hand, I am just not sure what I think about it.

My first impression of Abe was, should we say, not good. Making money on people’s grief to me is just one of the lowest things you can do, but whatever I guess he needed to survive. But then in the middle of his seances we learn that he *can* see spirits and converse with spirits (this is in the blurb so I don’t feel like I am revealing any spoilers) and I was like, so why could you not call on the real spirits to let them talk to their relatives? It is as if the author does not expect me as a reader to question that and it was weird.

Thomas and Abe meet in the course of Thomas investigating the case which is also mentioned in the blurb – investigating a missing young man turns into investigation of who killed many people and I usually love mysteries, I love historical mysteries very much. I could not believe how boring it was for me to read about this investigation. I cannot pinpoint why it was boring, although at least the reveal of the mystery for me was unexpected, so that was good.

I ended up quite liking both men separately, but for the life of me I could not figure out the reasons for such fast attraction. I mean they are both interesting characters, but the “I cannot live without you” came so very fast that, I don’t know, I was not convinced. Oh and Abe was Jewish, I don’t know about reciting prayers in one breath and being possessed by spirits in another. When I say I don’t know, I mean it – I am Jewish but not observant. I did not quite buy it, but who knows maybe there are some mystics who do it /allowed to do it. Not sure.