REVIEW: Captive at the Sicillian Billionaire’s Command by Penny Jordan 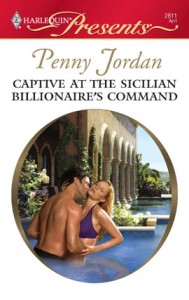 I’m an admitted fan of the HP line. I think its the length of the book, the emotion impact you get in a short time, and, well, for the lulz. Julie Simmonds is accosted in the street by an expensively clad man standing next to an expensive car. He claims that the child she has been taking care of was fathered by his brother.

Julie is your standard self sacrificing HP heroine. She uses all her money to pay off her dead sister’s debts. She leaves her good job to take on a new one that allows her to parent Josh. She is so close to the edge of poverty that she cannot even eat properly. She even let go of her lover, James, when he fell in love with her sister. James, her sister and their parents all head off to view a place in Scotland that might be the perfect locale for a wedding. The sister’s baby, Josh, is left in Julie’s car. The entire family is killed in a freak accident leaving Julie with tons of debt, little money, and Josh.

Rocco Leopardi does as his family requests. In this instance, he is directed to make contact with Julie, determine the child’s parentage. Rocco obtains Julie’s agreement to bring the child to Siciliy and submit to a DNA test. Apparently staying in London to obtain test results is not an option.

Rocco believes that Julie is Josh’s mother and that she a) is a neglectful one and b) a woman without morals. After all, that she is morally suspect can be the only reason that there is a need for DNA testing. But Rocco finds himself attracted to Julie, particularly when Julie is often ill and frail. Because ill and frail women can’t also be morally suspect.

This is standard HP fare that has a mildly assholic hero and a very doormat heroine (but not a virginal one). If one likes HPs, this story won’t disappoint but the lack of fire to either the characters left me hungry. C.