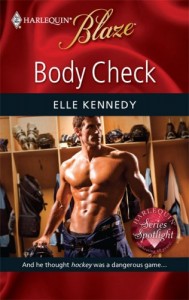 I was excited to see another sports book in the Harlequin Blaze line.   My last encounter with a sports Blaze was Hard and Fast by Lisa Renee Jones and I enjoyed that book quite a bit.   Bodycheck is a hockey book and it suffered a bit in comparison to another hockey book with the same name by Deirdre Martin.

The heroine, Hayden, read immature to me. While she was a kid, they moved around alot as her father spent his life coaching but they had a close relationship.   “Her father had always shown an interest in her life. He’d listened while she babbled about her favorite artists, and taken her to countless museums over the years.”   After her mother’s death, her father was able to amass a fortune large enough to provide him with his dream, owning his own team.   Now she’s all pissed off because “she was an adult and he was busy with the team…and no longer seemed to care about making time to connect with her outside the hockey arena.”

I couldn’t summon any sympathy for her. Her dad was there for her while she was growing up and now that she’s an adult, he wants to pursue his dream? Why is that so wrong? Regardless, her father is in the midst of a nasty divorce and Hayden has returned to Chicago from a full time teaching position at Berkeley to reconnect with him. (This is an oddity for me as well: She’s a junior professor at Berkeley teaching art history and working toward her Ph.D.?? I’m not sure there is a thing such as a “junior” professor let alone one without a doctorate.)

I also didn’t understand what Hayden was doing in a hockey bar if she hates everything hockey? In most cities with a pro team, it’s easy to know which bars are frequented by the team. In Chicago, there had to be a few bars where she wouldn’t come within spitting distance of even a hockey picture. At least stay away from bars named “The Ice House” which was owned by two HOCKEY PLAYERS WHO PLAY FOR HER DAD.

Hayden decides that she needs a one night stand and at the urging of her girlfriend proceeds to pick up a hottie in the bar. Unbeknowst to Hayden, said hottie is Brody Croft, star forward for the Chicago Warriors. When Brody realizes that Hayden has no idea who he is and despite that she’s not the “leggy blonde” that he usually likes, he is ready to retire to Hayden’s hotel room for a little action.

It’s an explosive encounter that leaves Brody ready for more. For Hayden, though, the event was a one time thing and she refuses to give Brody her number. This rankles Brody as he can’t remember better sex and he wants to meet up again.   As fate (or the author machinations) would have it, the two meet after the next Warriors game which Hayden attends with her father.

The relationship between Brody and Haydne moved at super sonic speed. Brody began to have internal narratives of possessiveness and emotional wonder after three encounters, two of which were sexual. The characters emoted on the page but I felt that the couple’s feelings lacked foundation for the agnst I was being pushed to buy.

I was also disappointed at the sports angle of the book. You said in your letter to the reader that you pestered your hockey-playing buddies with questions like “What really goes on in the locker room?” and I wish that more of that was actually shown. Instead of pre game rituals, bonding, and the like which I find interesting because it’s a peek behind a curtain not generally known to the public and certainly not the female public, we merely get banter that could be from any other romance book between male characters. Further, everyone’s actions were in contravention to the team and the team concept and I do mean everyone, from the villains to the heroes.

The story speeds through the sex, the I love yous, the betrayals, and any attempts at creating nuance were lost in the rush. Perhaps content too ambitious for the size of the book but the from the overall arc to the details, I wasn’t convinced in either the relationship or the plot.

→ Jane
Previous article: WINNERS of the ACE/ROC Giveaway
Next Post: REVIEW: I Heart That City: Razzle Dazzle by Willa Okati