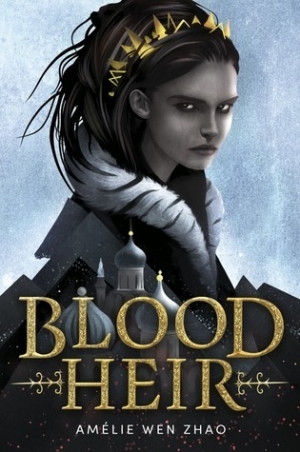 This hot debut is the first book in an epic new series about a princess hiding a dark secret and the con man she must trust to clear her name for her father’s murder.

In the Cyrilian Empire, Affinites are reviled. Their varied gifts to control the world around them are unnatural—dangerous. And Anastacya Mikhailov, the crown princess, has a terrifying secret. Her deadly Affinity to blood is her curse and the reason she has lived her life hidden behind palace walls.

When Ana’s father, the emperor, is murdered, her world is shattered. Framed as his killer, Ana must flee the palace to save her life. And to clear her name, she must find her father’s murderer on her own. But the Cyrilia beyond the palace walls is far different from the one she thought she knew. Corruption rules the land, and a greater conspiracy is at work—one that threatens the very balance of her world. And there is only one person corrupt enough to help Ana get to its core: Ramson Quicktongue.

A cunning crime lord of the Cyrilian underworld, Ramson has sinister plans—though he might have met his match in Ana. Because in this story, the princess might be the most dangerous player of all.

I am an occasional reader of YA fiction. I am more than happy to pick it up though when I think that story may interest me. When I heard about your book and alleged controversy surrounding it when it was supposed to be published I think in February, I ordered it almost right away. I was annoyed when Amazon notified me that the publication was delayed and eventually we learned that it would be published in November. I had not just ordered an ebook, but I also ordered a hardcover, something I very rarely do these days, because I don’t have space for hardcovers and paperbacks anymore.

For me it was a strange book. Certainly nothing like what I expected. I don’t mean that the story is particularly unique – there are definitely some derivative themes running through the narratives, but these themes were much smaller than I worried it would be after reading some ARC reviews (because boy I spent time reading ARC reviews and no, it is not a good thing for my review, but hey the controversy was how I discovered the book and for few days back in January or February I fell down the rabbit hole).

So what was so unexpected? No, not the girl who found herself in the position of being Chosen to save her people. Actually, this is just the first book, so who knows if she would end up doing so or her people would end up mostly saving themselves. No, what pleasantly surprised me was the world-building. I knew that the book was supposed to be based in the country reminding us of Imperial Russia, but not quite Imperial Russia and to me, it worked, it worked quite well. I think to me the author managed to recreate the *feel* of Russia and I am still not sure how she did that. Meaning that I am not sure how pieces of the puzzle created a more or less cohesive picture.

At the same time, the Russian language use in the book hurt my eyes and ears a bit, so that was a bit of dissonance for me. No, it did not upset me or anything like that, I just could not figure out for example why the author who chose to put some Russian words directly transcribed from Russian in the text and transcribed perfectly fine, made up some other words which sounded so weird. Maybe because It was Russia, but it was not? I don’t know. Russian naming conventions were ridiculous there is no other way to say it. No, that’s not a big issue, but it makes an author’s writing look sloppy in my eyes, that’s all. It is as if she just didn’t bother to research how Russian last names are supposed to end if the character is a woman for example.

I thought that the author knew how to tell an engaging story and from the beginning put the reader in the right moment in time and place to make sure I was interested. Instead of being treated to Ana’s back story in a long information dump, we meet Ana when she is in the horrible prison trying to find a person who supposedly could help her find her father’s murderer and the first third of the book moves really fast and it is tense and suspenseful. Then it dragged a little for me but not much, I finished the book pretty fast.

The book is incredibly dark. As I mentioned before, I am an occasional reader of YA stories, but even I know that the dark themes are common in this genre. The theme of human trafficking and necessity to fight it runs very prominently in the story and of course it is not a light theme. My goodness though, one of the reviews I saw recently mentioned that Ana needed a hug and I totally agree with the reviewer. I felt as if *nothing* and I mean *nothing* good happened to her and A LOT of bad things happened to her that includes lots of murders of people close to her and torture and murders.

Torture of one of the characters was seriously graphic for my taste by the way. I am aware that the book is supposedly based on the legend of Anastasia. I am not sure what this means for the book though. I didn’t watch the “Anastasia” movie, only the cartoon so maybe it follows the movie closely. I did feel I needed a breath of lightness which the narrative did not really provide for me .

I don’t know how I feel about Ana. She was naïve and brave, but her I am a monster or not a monster kind of got old for me. And yes, indeed whose bright idea was to call a male lead Ramson? Because Ransom is the only name for him in my head.

I am curious what the next books will bring .