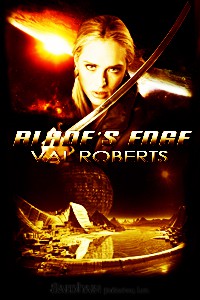 I am trying to climb onto the futuristic bandwagon so I was excited when I saw this book released from Samhain this week. While the story had potential and I found it readable, I ultimately came away disappointed.

Blademir, the Crown Heir to the throne of Barian, was sent on a diplomatic mission to Zona, a matriarchal society that had closed itself off to the rest of the planet. Zona grew out of a pleasure slave to Barin (how she grew to have her own culture I never really understood). Zona refused to advance technologically causing people living in its outer sphere to conduct raids into Barian land. Blade has been sent to Zona to convince the Matriarch that a little cooperation and trade could increase the standard of living for all Zonans.

Taryn Penthes is a Zonan Silvergard Commander. The Silvergard are the elite fighting squad charged with defending the Zonan. She is to escort the Bariani diplomatic team to the Lady Palace. The team gets ambushed and two members of the diplomatic team are killed and so is the Crown Prince’s Prime. Taryn recognizes she only has a few options. She must first spirit the remaining Bariani to the Jags, a rugged part of Bariani that borders Zona and she must make herself disappear. Once it comes out that she has killed the Crown Prince’s Prime, the only thing she will face in Zona is an execution squad.

Taryn Penthes is actually the twin sister of Talyn Penthes, the Crown Prince. Talyn was announced the heir presumptive at birth and to ensure her crown, Talyn attacked Taryn when they were 16 leading to a knife scar on Taryn’s face. Taryn left her family home and entered the Silvergard.

Blade was supposedly an intentionally dumb hero but this was one of the biggest plot disappointments of the book. Much can be down with the faux slow hero and yet here it’s just told to us in a series of accounts by Blade’s siblings to their father about how brilliant Blade really is.

The plot and character development was dropped down like a hammer. The Matriarch of Zona didn’t want her daughter, Taryn, to fall into the hands or be seduced by a Bariani for fear she would become a pleasure slave. Blade’s father, ruling of Bariana, didn’t want his son to fall in love with Taryn because Blade’s mother had been a Zonan woman who abandoned the family once it was revealed that Blade’s father was to be the next ruler.

Taryn’s friend Leone, and others however, saw that Taryn and Blade mating would unite the two countries and be beneficial to the planet becoming part of the Dozen Worlds.

The world building by contrast was doled out in drips and drabs. I would have much preferred an info dump and more delicacy given to the treatment of the plot and character development. For example, I am still stumped by the fact that the heir apparent in a Matriarchal culture was known as the Crown Prince particularly when you had a Lady Palace, the Temple of the Serene Mother and the ruler called the Matriarch. I was further confused about exactly what type of planet this is when at one moment Taryn is in a medical scanning tube that can tell that she has a low grade infection and 48 hours until her ovulation, but she’s given hydrocodone for pain. I never got the full story about how Zonan, an offshoot of Barian, came about. The Matriarchy was supposed to be descended from an Bariana pleasure slave but I missed how a pleasure slave could have escaped, claimed and held land long enough to create a parallel and competing society.

The sex scenes made me wonder exactly what I was being told. The first sex scene features the twin, the ostensible villain, having sex after being intentionally drugged. Just because she likes it afterward, doesn’t make it any less of a rape at the time. The scene seems clearly written to indicate that the drugs were overcoming any negation. The very next scene after this, not the very next sex scene, was the heroine having sex with the hero after getting totally blotto on a half a bottle of liquor.

What am I being told with the juxtaposition of those scenes? That sex under the influence isn’t just for villains anymore?

I think the philosophical underpinning of the story was two fold. First, together a man and a woman are stronger than separate. Zona and Barian represented two cultures and countries that, when united, presented a formidable force but apart could not enter the Dozen Worlds. Both cultures harbored misunderstandings and mis perceptions about the other leading to long estrangement which harmed both their people on a macro level and on a more personal level, both the children of the rulers of Zona and Barian were affected adversely.

The second philosophical push of the story was that men are always under the influence of women. One character says “Men marry their mothers” and this theme was reinforced by later actions. In this, I thought perhaps I was being told that no matter the political system, women always held some amount of power over men, particularly in the form of influence.

The book turned a great deal for the better in the second half as Blade comes to recognize that the very caveman like tendencies he wanted to exert would only feed the preconceptions that Zonan women, like Taryn, had of Barian and its culture.

Ultimately, I would like to read more in this world and by you but I hope to have fewer regrets with my next book. There were great ideas in this story. C

This book can be purchased at Books on Board in ebook format or other etailers.

→ Jane
Previous article: Thursday Midday Links
Next Post: WINNER of the Best Review of My Were Gerbil