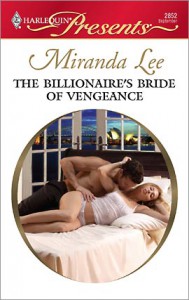 This is the first book in your Three Rich Husbands series (no need for  subtlety  here).   Honestly the last memory of a Lee book I had was of a weeping doormat heroine who shed more water than rain falls in Seattle.   I had signed up for the HP subscription service and your book was one I received.   So I tried it out.

Russell McClain vowed vengeance against Alistair Power, a wealthy Australian businessman, when Power Mortgages foreclosed on Russell’s family farm leading Russell’s father to commit suicide.   Sixteen years later, Russell is successful.   He has ruined Alistair Power, and, as a coup de grace, has even purchased the Belleview Hill mansion that housed the Powers for years.

Nicole Power is summoned to claim her personal possessions before the family home is turned over to the new buyer.   Nicole was a spoiled rich girl who, after finding her fiance in the arms of his PA, began shambling about the world, finding new meaning in helping poor children.   She realizes that the jewels and other effects can be sold to provide for a better environment for the children in a particular Thai orphanage.

Russell’s ruining of Alistair Power doesn’t give him quite the satisfaction that he thought it would.   When confronted with Nicole Power, Russell begins to believe that if he gets Nicole to fall in love with him, his need for revenge will finally be satiated.   After enjoying a sex filled weekend with Nicole, Russell’s need for revenge begins to fade in proportion to his need for Nicole. Russell vacillates back and forth, based on whether he thinks Nicole is a spoiled rich girl or whether she’s someone worthy of his love and trust.

The best part of the story is the interplay between Russell and his friend Hugh (also called “Hush” in one of the typoes in the ebook).   Hugh thinks Russell is a right bastard for trying to wreak vengeance on Nicole.   Of course, Russell’s reasons for vengeance are all for naught because Alistair is Nicole’s stepfather; Nicole is good and pure; and she’s out there to help the children.   It’s fairly classic HP angst though so I’d give it a C because Russell is a right bastard and his comeuppance wasn’t enough but I was very interested in the romances of the two other RICH MEN whose reviews follow this one.

This book can be purchased at