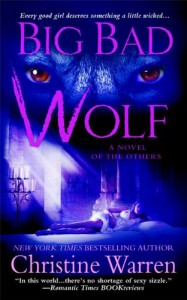 I went out and bought this book for myself. *runs around in circles* A while back I blogged about the seeming dearth of werewolf books, at least books that focus on the pack dynamics and the myths of the beast. Another reader suggested I try Christine Warren’s Big Bad Wolf. I admit that the one book I had tried didn’t make me a fan but I was willing to take another chance. I went off to the bookstore that evening and bought the book. I read and finished it that same evening.

Graham Winters is the Alpha of the Silverback Werewolf Clan. He is bored to the point of celibacy with all the hot Otherworld women around him. He doesn’t have any problem getting it up, but no amount of sexual innovation from even the most gorgeous paranormal is floating his boat anymore. Thirteen days ago, he walked away from one super model look alike and now he’s wondering what he’s going to do with himself. (For a werewolf, thirteen days is like a decade).

Then at the same party in which Graham is bemoaning his celibacy and dearth of women to whom he is attracted, he catches a whiff of something delicious; something that makes his beast stand up and howl. The carrier of the scent is Missy Roper, a kindergarten teacher, and friend of his best friend’s new wife. Graham seems to recognize instantly that Missy is his soul mate. The problem is that she’s human and he doesn’t do humans. But the mate bond knows no boundaries and he grabs Missy and carries her off to his lair. Literally. Because Missy is trying to run away from the party and from Graham (she doesn’t really know he wants her), Graham panics and picks her up and doesn’t let her down until they are in his townhome.

Missy is torn. On the one hand she has had a bad, bad crush on Graham forever. On the other hand, Graham hasn’t noticed her at all before. He was the BEST MAN, for god’s sake, while she was the matron of honor at the same wedding. Who really has the strength to withstand the sexual onslaught of your long crush? Not Missy. After Graham has had his bad, sexy way with her, however, Missy is pretty sure she needs to get away. This only serves to confuse and create more panic for Graham.

Missy was a fun heroine. Self deprecating and pretty self aware. She acknowledges that she is kind of the clichéd kindergarten teacher. “After all, someone had to be the frumpy spinster. ” Missy doesn’t suffer from some horrible self esteem issue, but she does think that she’s out of Graham’s league and can’t believe that she’s anything to him but the slut du jour. She questions Graham about his change of heart:

“Just because I teach kindergarten does not make me a simpleton. Don’t like to me, please.”

“I’m not lying.” He had to force himself to concentrate on the conversation. “I really am a moron, and I really do think you’re utterly gorgeous and sexy. Didn’t you figure that out when you had me so hard and hot that I devolved into a monosyllabic cretin just because I couldn’t wait to get inside you?” He shook his head. “That’s not the kind of thing I can fake.”

“From what I understand, you don’t have to fake a thing,” she snapped. “You’ve got quite a reputation, Graham. I hear there’s not more than a handful of women you’ve ever met that you haven’t ended up in bed with. So forgive me if I don’t think it’s an accomplishment that I gave an erection.”

Graham, however, knows that Missy is it for him, despite her humanness. It’s not like werewolves live long lives anyway. Because of their tendency for challenges to the death, their impetuosity, and their wrong headed belief in their own invincibility, male werewolves tend to have even shorter life spans than humans. As much as Graham would like to do nothing more than woo Missy (which mostly consists of giving her mind blowing orgasms again and again and…well, you get the picture), he has to deal with his cousin Curtis. Curtis would like to be Alpha but he’s too weak to sustain a physical challenge. Thus Curtis tries to get the Pack to push Graham out by shaking the confidence of the Pack and higher governing Pack bodies; and by suggesting that Graham is not suited to be alpha since he is old (34), childless and trying to make friendly with the Other paranormals.

It is true that Graham is trying to change the philosophy of the Pack by shedding some old, bad Pack philosophies and move the Pack into the modern age. He believes that the Pack will be strengthened by Other specie alliances and that the dated mores of the Pack hurt more than help.

This is a very sexy werewolf story. It reads quick and there’s a satisfying conclusion. But. But, the romance rests too heavily on the mate bond. One minute Graham can’t even remember meeting Missy before and then next her scent is so intoxicating that he cannot live without her. One minute they are shagging each other’s brains out and the next Graham realizes he loves Missy. I didn’t get to see any of the growth in his feelings for Missy. Missy had strong feelings for Graham all along, but we don’t get to see her crush mature into love either. The entire romance takes place over a few days. There simply wasn’t enough attention paid to the emotional connection of the characters. Finally, the last sex scene involved Graham in his shapeshifted form and well, I paged through those quickly. I don’t regret reading this story. As I said in the beginning, the pace of the book was snappy and I was entertained. Overall, though, it lacked substance. C+

This book can be purchased at Amazon. No ebook version of this book. It’s from St. Martin’s Press who either don’t do ebooks or charge $14.00 for it. However, this is apparently a version of it from Ellora’s Cave called Fur Factor.

→ Jane
Previous article: REVIEW: The Good Mayor by Andrew Nicoll
Next Post: Thursday Midday Links: Rosario, One of the Best Bloggers You May Not Read