Jia’s note: Because this is the fifth and final installment of the Gardella Vampire Chronicles, there’s really no way to avoid spoilers for the previous books in the series. Readers who’ve been waiting for the entire series to come out before starting, tread carefully.   Don’t say I didn’t warn you. 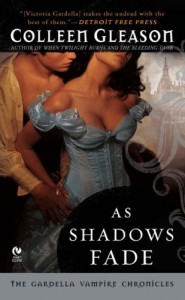 This is such a difficult review for me to write. I’ve been struggling with it for days now, writing and rewriting and revising over and over again. But I can only do that so many times before my eyes start crossing and fall out of my head. So here it is.

I’ve been a big fan of this series since the first book, The Rest Falls Away, which introduced Victoria Gardella, a Regency society miss who learns that she is the latest in a long line of vampire slayers. As a fan of Buffy the Vampire Slayer, I do think the comparisons are accurate and apt. There aren’t necessarily direct analogues but when I pitch this series to my friends, I always frame it as Buffy in Regency England. That’s usually enough to give an idea as to whether they’ll like it.

While I’ve liked each installment to greater and lesser degrees, it’s the overall experience that has kept me coming back for me. What do I mean by that? What I love about this series, what I’ve always loved about it, was how it focuses on Victoria’s growth as a character and how her evolution and maturation as a woman and vampire slayer is reflected by the men in her life. When we first meet Victoria, she tries to balance her life as a Regency miss with her duties as a vampire slayer and to that effect, she marries a man she loves but knows nothing of her heritage and fight against the supernatural. And because of that, he ends up paying the price for that ignorance.

This, of course, led us to the main romantic conflict of the series: Max Presaro or Sebastian Vioget? Which one will Victoria ultimately choose? The previous novel, When Twilight Burns, answered that question. So congratulations, Team Presaro, your hero won.

Unfortunately, at the end of the previous book, Max decided despite his and Victoria’s mutual feelings, they couldn’t be together. This is not a favorite trope of mine. In fact, I hate it. I’m tired of male characters deciding to leave behind their love interests for “their own good.” While these books subvert the usual depiction: Victoria is equal to, if not stronger than, Max in power and the reason why Max leaves her isn’t to keep her safe (for her own good), it’s because he can’t stand by to watch her put herself in danger (for his own good).

Because of this aspect, As Shadows Fade started off on shaky ground. I liked the fact that Victoria decided she wouldn’t humor Max’s nonsense. The main reason why the “Man leaves woman behind for her own good” trope annoys me so much is because I’ve read/seen one too many depictions in which the woman simply accepts it with no questions asked, end of discussion. So I’d hoped to see the ways in which Victoria would show Max how very wrong he was.

But for me, their interactions didn’t quite live up to that promise. I’m not sure if it’s because my expectations were too high. That is an ever-present risk, especially when a reader loves a series so much. Their expectations keep rising until they reach unreasonable levels. I try not to do this because I know I’m only setting myself up for a fall, but I’m only human. On the other hand, it could also be an example of how it’s difficult to continue believable romantic and relationship tension after the couple has gotten together. Because I’ll be honest — not once did I believe there was a chance Victoria and Max wouldn’t end up back together when all was said and done. It’s not that I didn’t want an HEA; I’d been reading the series with the expectation that there would be one in the final volume. It’s just that all the delicious tension that kept me reading in the previous books was simply not here for me. In fact, I ended up feeling that their continued separation was contrived and drawn out.

I wish I could say the plot made up for this lack, but I can’t. After facing down the vampire threat, Victoria and the vampire slayers she leads must face a new one: demons. In fact, vampires have been fleeing town because demons are their longtime enemies and too bad for the vampires, they’re on the losing end of a power differential. After investigating the increased demonic presence, Victoria discovers that a demonic portal has opened, allowing them entrance onto earth. In order to close it, the slayers need to obtain an artifact of which only the vampire queen Lilith knows the location. Since Lilith has been the series’s primary antagonist, it’s easy to imagine how well the idea of teaming up with her goes over with Victoria. And what’s even worse, in exchange for revealing the location and lending her aid in obtaining it, Lilith wants Max as payment. That is a price Victoria does not want to pay.

In theory, the plot sounds perfectly fine. But I think I was so disappointed by the lack of sustained, believable tension between Victoria and Max, it bled over to prevent my enjoyment of the story. To be honest, I thought its execution was muddled. In addition to the contrived conflict between Victoria and Max — including a plot point in which Max attempts to regain his powers as a Venator — a substantial portion of the book focuses on Sebastian.

I’m not quite sure what Sebastian’s subplot was meant to accomplish. My gut says it was meant to be a redemption arc and possibly serve as set up for potential future books. I don’t know if there are future books but its introduction struck me as being somewhat sequel bait. Its development simply felt rushed and crammed into one book. Why hadn’t we seen more of this in previous novels? It’s not as if Sebastian hadn’t been a character since the very beginning. I can’t help but think that members of Team Vioget deserved better than a rushed subplot of which they (and the rest of us) may never know the resolution. Or perhaps I’m the odd one out and it was satisfactory for other readers.

I realize this review makes it sounds like I absolutely hated the book. I didn’t. I thought it was a perfectly fine end to a series I’ve enjoyed overall, and it’s one that fans of the Gardella Vampire Chronicles must read. I just wish it had been more cohesive. So many things were introduced — the demon versus vampire conflict which wasn’t explored with any satisfactory depth for me, Wayren’s true identity which struck me as somewhat random, Sebastian’s redemption arc — on top of the external plot (Victoria must seal the demonic portal) and romantic conflict (how will Victoria and Max get back together?) that a book of this length simply couldn’t be able to juggle them properly without stumbling a little. C+