REVIEW: All the Women in Pearl by Emily Ryan Davis 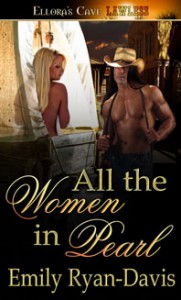 This is a book in which I loved the voice but didn’t love the execution of the story which means I’ll be on the look out for future books despite this one not working out for me.

John Raincrow has been dispatched by C.C. Carver’s family to bring her home which dovetails nicely with C.C.’s own desire to return home.   When C.C’s mother had had enough of the West, she left her sons and husband and took C.C. back east.   She remarried to a wealthy man and both died.   C.C., alone except for her stepfamily, determines that she’ll take her inheritance and return to her brothers in the West.

C.C. travels west in the company of her stepbrother and two others, all disreputable.   The story opens with C.C. and her traveling companions in a gambling establishment, working to cheat the house.   C.C. is dressed tartily and playing some kind of role in the grift.   John Raincrow finds C.C. here and “buys” her release from her group.

The workings of the plot are sound. C.C falls into the hands of an unscrupulous family and she must negotiate her time with them until she can get to her brothers in Pearl.   John Raincrow makes certain assumptions about C.C. based on her appearance and her company.

The problem is that the plot, in the execution, doesn’t stand up to the details.   C.C. is a wealthy woman, apparently in control of her own fortune.   She travels with the family out of choice, not compulsion.

John Raincrow is on his way to Trinidad to claim land of his own, a desire that burned fiercely for him.   Yet, later we find out that Raincrow has land already and the reasons he doesn’t feel like the other parcel is his own doesn’t quite match up because he didn’t have the funds to pay for the land outside of Trinidad but instead came to him as a result of a death of a friend.

The heart of the conflict is C.C. and John’s longings for each other.   They were connected before C.C. left and those feelings have remain unabated despite 10 years and geographic differences.   C.C. sees her opportunity to finally bring those unspoken feelings to a head but John is focused on leaving Pearl and thus cannot give into his own desires.

John’s justifications for needing to leave Pearl seemed weak to me (as did C.C’s predicament).   To some extent, I felt that these justifications and plot strategems were window dressing to create the right atmosphere to create tension.   I wanted more exploration of C.C.’s ten year absence from her family; whether that had any impact on her forming relationships; why she had no connection with any men back East.    Having said that, I did enjoy the voice and look forward to something perhaps longer from you in the future.   C

This novella can be purchased at Ellora’s Cave