Review: A Rival for Rivington (The Lords of Bucknall Club #3) by J.A. Rock and Lisa Henry 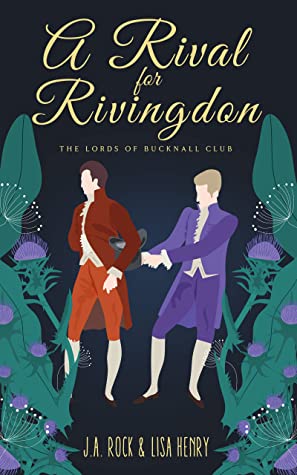 He must marry well, to secure his fortune.

The Honourable Loftus Rivingdon is poised to make his debut into Society. He’s beautiful, charming, and quite the catch of the Season. If only he could find the right hat. With the zealous assistance of his doting mother, Loftus has one ambition only: to meet and marry a wealthy peer. And Loftus knows just the peer—the dauntingly handsome, infinitely fashionable Viscount Soulden. Good thing there’s nothing standing in his way.

He must also marry well, to secure his fortune.

The Honourable Morgan Notley is poised to make his debut into Society. He’s beautiful, charming, and quite the catch of the Season. And he has just found the perfect hat. With the zealous assistance of his doting mother, Morgan has one ambition only: to meet and marry a wealthy peer. And Morgan knows just the peer—the dauntingly handsome, infinitely fashionable Viscount Soulden. Good thing there’s nothing standing in his w—

Damn it all to hell.

When Loftus and Morgan both set their sights on Soulden, the rivalry of the Season begins. Their mutual hatred escalates into spite, sabotage, and scandal, as all of Society eagerly waits to see which diamond of the first water will prevail. Except the course of true loathing, just like true love, never did run smooth. The harder they try to destroy each other, the closer they come to uncovering each other’s deepest vulnerabilities—and the more difficult it becomes to deny the burning attraction between them.

I GOT THIS BOOK ON KINDLE UNLIMITED.

This is the third book in these series. It can definitely be read as stand alone. The timeline is rather close for all three books so far – one or two events are shown in this book from the POV of the different character, and there are cameo appearances but I promise you won’t be confused.

This is how this book begins.

“Loftus Rivingdon, third and youngest son of Baron Rivingdon, stood before his tailor’s mirror and slowly lifted an ivory silk hat, trimmed with apple-green ribbon, in both hands. He placed it carefully atop his head and studied himself. Behind him in the mirror, his mother, Lady Emmeline Rivingdon, watched, her hands clasped in anticipation. “Oh Loftus—” she began in a breathless whisper. “I hate it,” Loftus declared loudly. Lady Rivingdon gasped. “Loftus! But you look simply stunning.” “This ribbon does not match my eyes!” Loftus whirled to face his mother. “I was promised a ribbon that would match my eyes!””

And boy does it reflect what our main characters are all about for at least half of the book. At some point I said to myself that if these boys will talk about hats or buttons or coats one more time, I will *scream*.

As the blurb tells you, both Morgan and Loftus are having their first seasons and their mamas told them that their goal in life is to marry well and they are both obsessed with fashion and looks because of course being pretty will help them marry well.

Wait, does it sound familiar to you? Because of course that’s what we have seen was expected from young women in Regency and many other historical periods – to marry well, to look pretty, and all of that.

And if you wanted more, obviously it was extremely hard for women. Did the authors attempt to subvert the trope here? I don’t know, but if the goal was to write about young men with the same societal expectations as it was from women, maybe it would have made more sense to show subversion with the male characters using more than just names and physical anatomy?

Fashion is fun, of course men and women can and should be interested in it if they so desire, but I have to be honest with you – I don’t care for air headed women characters who only care about clothes and looking pretty and I don’t see why I should start liking boys who behave as complete air heads. I again experienced a whiplash in this book because for the life of me I don’t know what society the authors are portraying in these series. Is this regency with the tolerance for same sex relationships? Why are we so concerned with the men throwing away their reputation if they kiss each other then? Will somebody think of children?

Because you see both main guys are eighteen and they get married at the end (not a spoiler I hope). Their happy ending left a huge question mark in my head because – money? What would they do if the parents stop paying rent on their house please? There was something both of them are planning on doing to make a living, do not get me wrong, I just had doubts that their intended occupations would solve their potential financial issues.

Having said that, their actual romance was very funny in places – them practicing to be sure they can fulfill the potential demands of the potential husband who rejected both of them already – yep that was hilarious. Practicing sex to make sure you can have sex with somebody else always goes well in romance.

Their chemistry was nice when they started acting less selfish and less vain, the lamb was hilarious, but overall I am just not sure it worked all that well for me.

““I think,” Morgan said, “that Viscount Soulden is as rough as a stallion!” “And as big?” Morgan tore his gaze away from Loftus’s damp bottom lip and tried to pretend he had an air of worldly knowledge. “Oh, certainly.” “And does he imagine that we are too willowy and frail to handle such dimensions?” Morgan gasped, and did it rather better than Loftus. “I do not think I could handle a stallion!””