I have to start out this review by admitting my personal bias. I am not a huge fan of kids in romance books, or at least how they seem to be generally characterized. While I am a mother myself, I do not believe that children are necessary to be fulfilled either as a woman or as a married person. One of the reason I dislike baby epilogues is that by ending a romance with a baby more often than not seems to convey the idea that babies are the natural result of love (not to mention marriage) and that a fecund free coupling is really not reaching the pinnacle of happiness. 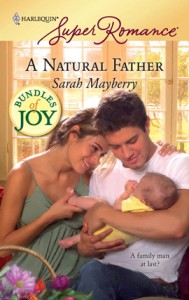 But why did I buy a book that was called “A Natural Father” and had a baby on the front of the cover?   Because I’ve enjoyed almost every Mayberry book I’ve read.   On the one hand, I appreciate that you tackled a difficult subject and the story was well done because despite my insides churning, I was compelled to read on. On the other, I don’t know whether the fair handed message you intended was actually delivered because I felt like, at times, the characters were saying that it was okay to a) not want to be a mother and b) that having children did not equal true love but I wasn’t entirely sure that the story was committed to that message.

Lucy Basso was a difficult heroine for me to like. She, like the storyline, presented what seemed like dueling personalities. Her boyfriend cheated on her and then dumped her. She found out she was pregnant and the boyfriend wanted nothing to do with her. The boyfriend had no visible means of support, she supported him and was offering no financial support for the child. Yet, she still clung to the hope that he would be involved in her life and the child’s life. She did come to the realization that the ex wasn’t going   to be there, ever; and maybe it was the right time for the book, but just not quick enough for me.   She was, however, not a moper. She got on with her life, accepted help when she needed it and put together an awesome business plan to further her fresh produce delivery service.

Dominic Bianco has always had a thing for Lucy, even when they were young.   He’s a recovering divorcee who is struggling to come to terms with where he fits in the family business since his father has trouble letting go.   Dominic sees an opportunity to partner with Lucy and possibly get closer to her.   Dominic has no problem with Lucy’s pregnancy and in fact, her fertile self makes her more beautiful in Dominic’s eyes.

Interestingly Lucy isn’t interested in Dominic in the beginning.   She never really saw him until her sister pointed out just how truly gorgeous he was.   Then Lucy was uncomfortable with her burgeoning desire and her cratering self image, not to mention her doubt about men in general.     Dominic seems like a near perfect hero until he pulls a classic–I know better than anyone else–move toward the end of the book.

The fascinating relationship was the secondary romance involving the sister who does not want to have kids and her husband who does. Unfortunately the sister hasn’t been honest with her husband and repeatedly fails to share with him that his vision of the future, doesn’t match hers. The sister has to grapple with coming clean to her husband and possibly ruining their marriage or hiding the truth from him or going along with trying to have a child even if she doesn’t want to.

I wasn’t thrilled with where the story ended because again, I felt that there wasn’t sufficient validation for the other side of the coin – that children aren’t necessary to have a fulfilling life or that a woman who does not want to have children is somehow abnormal or incomplete.   The writing, though, is very good and I was compelled to finish the book, almost against my will.   In the hands of another author, I think this could have easily been a wall banger.   C

This book can be purchased in mass market from Amazon or ebook format from the Harlequin Site and other etailers.