REVIEW: A Man Worth Keeping by Molly O’Keefe 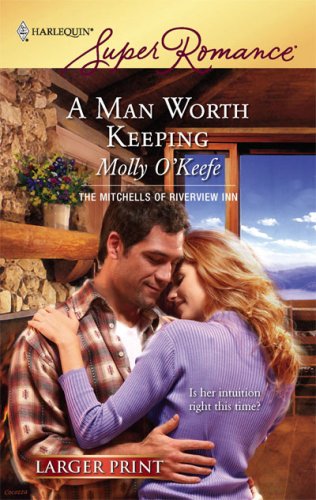 I actually read this book first. I think it was for sale at Amazon Kindle for some crazy low amount like $1.40 or something. It is actually book 2 of the Mitchells of Riverview Inn. I reviewed book 1 yesterday, Baby Makes Three.

Max Mitchell has been hiding out in the Catskills serving as general contractor, handyman, and construction worker for his brother, Gabe’s,  Riverview Inn.   Two years ago, Max was shot while in the line of duty during a domestic dispute call.   The circumstances surrounding this event is shrouded in mystery but has had long lasting effects on Max.   The job might not be satisfying, but no one’s life depends on  how Max shovels the snow or hammers in a nail.   It’s safe.

Delia is seeking a job as the manage of the spa for Gabe’s Riverview Inn.   The remote Catskills retreat is the perfect temporary hideout for Delia and her daughter.   Delia is tired of being afraid all of the time but she’s not sure what to do and is scared to trust her instincts.   She fell in love with Jared and sheriff of Lubbock Texas, former football star was all that she ever wanted.   Except somewhere along the way, Jared fell in with a bad crowd and starting taking bribes. When Delia and Josie found out, Jared turned violent and Delia took Josie and ran.   Delia, though, knows she can’t run forever, but she doesn’t have any good solutions.

Max has a big savior complex that he is trying to suppress when it comes to Delia.   Her haunted eyes, overly protective attitude toward her daughter, and her secrets call to him.   He feels, given his past mistakes, that he is not someone anyone can rely on let alone a young scared mother and her sullen and equally scared daughter.   Later Delia confronts him on this, saying he only wants her because she’s a victim but he denies it.   I wasn’t so sure.

I really love the descriptions that you use.   There’s a quiet elegance to your prose that makes drama seem natural.

He watched Joe walk away until he was replaced by snow, by gray sky, by the isolation Max cultivated like a garden

I thought Josie, the daughter, was fairly well crafted. She doesn’t understand why she has been separated from her father.   She lashes out in the form of bad behavior and shuns her mother.   She also attaches herself to Max.   I did think that Josie took the explanation of why they were running away from her father almost too well, particularly given that Delia has asked Josie to lie about their last name.

Delia’s lies kept mounting and some of them  just seemed so unreasonable and far fetched given the lengths that she would need to go to keep them out, particularly when Josie had to be complicit with those lies.

The storyline started in Baby Makes Three concerning Max’s  absentee mother and his father is carried further in  this book.   Iris Mitchell comes to Riverview Inn to try to reconcile with her sons after thirty years  and confront her husband, th man who never divorced her, about their past.   Iris and Patrick have a very complicated history to which  only they are privvy.    I thought the scenes between Iris and her sons, particularly Gabe, were really powerful.    Despite the newfound peace and love Gabe has with his own family, he is not ready to forgive and forget.   I liked this.   Max is less  demonstrative than Gabe.   He doesn’t need Iris gone from Riverview Inn, but he’s  certainly not welcoming her to the bosom of his family.

Max is one of the strong silent types, yet he is the one to push for a resolution.  I was very conflicted about Delia. I thought on the one hand she was brave to run and try to carve out a positive situation for herself. I got a litte impatient with Delia and her lies and her inability to trust what appeared to be a steady man and a good support system in Max’s family.   Still, there were some emotionally gripping scenes and after Iris’ bombshell news, I couldn’t wait to read book 3.   C+