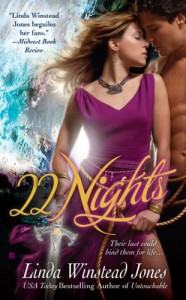 First off, the cover on this book is a bit deceiving.   The setting of the book is a fantasy historical world set in a made up kingdom (I always think of this kind of setting as middle earth but have also considered it to be medieval but does medieval imply some political structure?).   There are two romances told within this story and the two serve as a sort of foil for one another.

The main protagonists are General Merin, a high ranking official for the Emperor Jahn, and  Belavalari Haythorne of the Turis.   Emporer Jahn has determined it is time for him to marry.   His advisors have compiled a list of six brides and one of them is Bela due to the fact that her family has recently come into a great source of wealth via mining.   Merin has a history with Bela and the Haythorne family and offers to go and fetch her.    The Turis are a fierce clan and is not likely to welcome a courier from the Emperor.

When Merin arrives, he finds out that Bela had tricked him six years ago and married him via the Turis custom.   She also uses him to lose her virginity and has told her entire family a story that paints Merin very black indeed.   Merin demands a divorce and is told that in order to become divorced the two must live, work, and play together bound by a rope for 22 nights.   At the end of that time, the two can have their divorce.   Cut the rope and the two cannot try again for three years.   Merin must get his divorce and return Bela to the Emperor before the Summer Festival.

The secondary storyline is Leyla, a witch whose power of suggestion can steal a person’s memories, and a young wheelsmith, Savyn.   Leyla was sold into marriage by her parents in exchange for power and wealth.   She outlasted her elderly husband and has become a wealthy, powerful woman in her own right.   Leyla and Savyn have been having an affair for several years but now that Leyla has been ordered to present herself to the Emperor, she feels that she   must cut Savyn loose.   She cannot live with him for she fears that people will mock him for being with such an old woman, for being with her only because of her wealth.   Savyn wants only to be with Leyla but before she goes, she commands him to forget her.

Bela is a very immature heroine and very spoiled.   She pouts, sulks, and acts without thinking.   But it appears that she is written intentionally in this manner and her character is consistent throughout.   This is not to say that she doesn’t grow but that she is fairly artless in her responses.   There is no question that her actions toward Merin initially and six years previous were hugely immature and it doesn’t appear she grew significantly.   It’s also possible that Bela’s immaturity will prevent some from enjoying the book.

Interestingly, Leyla, the secondary protagonist, puts forth a very different mein.   She is thoughtful, almost martyr like.   She has had a difficult life and recognizes that you can’t really have everything.   Bela and Leyla are a study in opposites, both hovering on ends of the spectrum, and their character arcs bring their attitudes toward life closer together.   It’s this contrast that made the story interesting.   17 chapters of Bela or Leyla would have likely driven me batty.

There was also an interesting discussion of predestiny and whether you accept it or fight against it. I wished that had been woven into the fabric of more of the story instead of left to the end.   There are also plenty of details that are given throughout the story but particularly at the beginning that have no relevance to the story such as how Merin likes homes decorated or whether he will be Minister of Defense someday.   There was some indication early on that there might be political machinations that would drive the plot but to my disappointment, there was little to none of that.   Further, as a fantasy, there wasn’t a great deal of detail given to describe the world in which the characters inhabit.   There are customs and places described but isolated and not part of a bigger picture.   It was nice, though, to read a fantasy that didn’t involve vampires, werewolves, or demons.   C+

This book can be purchased in mass market from Amazon or Powells or ebook format (Strangely I can only find it in Sony format).