I ordered your book because I liked the cover and I was looking for a good “coming out” story.   Homecoming is a sweet, modern romance between two likeable young women, but I almost gave up on it before I got to the good parts. 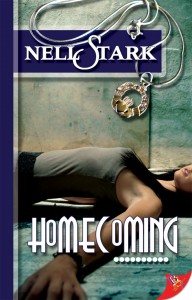 Sarah is a premed student with a bright future.   When her parents discover that she’s a lesbian, they freak out and disown her.   Sarah’s girlfriend, who wants to stay in the closet, dumps her over the phone.   Although it sounds heartbreaking, a lack of cohesiveness at the beginning prevented me from becoming engaged in the story.   The first few chapters read like a string of flashbacks and a series of prologues put together.   We’re introduced to a couple of characters (probably from a previous book) that have no real significance in this story.

Sarah feels all alone in the world and is forced to transfer from Yale to a less expensive university.   Things perk up when she meets her new roommate.   Rory is a hot geek who loves video games and film studies.   She’s also straight-maybe.

Rory and Sarah hit it off, and the story is smoothly written from here on.   Sarah is described as boyish but beautiful, with short hair and an androgynous look.   All of the femmes on campus are in love at first sight.   Sarah doesn’t notice the attention because she’s totally unaware of her appeal.   I’m a sucker for this classic romance trope and you made it work through character development.   Sarah has a wry, self-deprecating sense of humor.   She’s also passionate, unpretentious, and idealistic.   Now that she’s out, and cut off from her family, she’s learning how to stand on her own.

The prettiest lesbian in the university, Chelsea, quickly sinks her claws into Sarah.   They start dating but Sarah holds off on sex, claiming she’s not over her ex.   The truth is that she’s falling for Rory.

Rory is another great character, quirky and outgoing.   She’s always liked guys but she finds Sarah very attractive.   As roommates, they spend a lot of time studying and hanging out.   Rory sees Sarah kissing Chelsea one night and imagines taking her place.   When Sarah rents the movie Bound, which features some hot girl-on-girl action, they watch it together and Rory gets hopelessly turned on.   The air between them sizzles with sexual tension.

Both Rory and Sarah become involved in a campaign to legalize gay marriage, and this political aside failed to hold my interest.   It’s not that I’m against those rights-‘on the contrary.   I just felt as though the issue took up too much space and came off as a bit didactic.   I also wish the “coming out” portion had been more personal, more emotional.   The end of Sarah’s relationship with her parents isn’t explored in detail.   I didn’t get the sense that they’d ever been close or that either side would attempt to reconcile.

[spoiler]Another aspect that bothered me was Rory’s abrupt sexuality switch. She goes from crushing on guys to crushing on Sarah and wondering if she’s bi. Before she even talks to Sarah about their attraction, or shares a kiss with her, she announces that she’s “queer.” Rory isn’t interested in any women besides Sarah, so her statement surprised me. Does falling in love with a woman automatically make you a lesbian? And, are bisexual heroines as rare in lesbian romance as they are in straight romance? I believed that Rory was committed to Sarah, not “just experimenting,” but I wasn’t sold on her total gay conversion.

My last quibble is with Sarah. After avoiding Chelsea’s bed for months, she finally breaks up with her and confesses her love to Rory. They make out like crazy and Rory is ready to go all the way for the first time. But Sarah changes her mind and leaves Rory unsatisfied because she doesn’t want Rory’s parents to disown her. Yes, you heard it right. Sarah can save Rory from her own gayness by refusing to put out! [/spoiler]

Overall, Homecoming is a smart, sexy romance.   The characters talk like real college students, not like your mom trying to sound hip.   Rory is Korean, and I appreciated the inclusion of an Asian heroine.   I also liked the way their relationship developed over time, and through genuine affection.   Your voice reminded me of Sean Kennedy, a popular m/m author.   Perhaps fans of his would enjoy you.   C+

We have a PRINT copy of this book to giveaway. Comment by 3pm EST Tuesday to win! (One win per person for the day of our Gay Writes giveaways, but feel free to comment on all posts to increase your chances of winning!)