My blogging partner, Jayne, commented to me a week or so ago that I had better love this book else I would die at the point of the exclamation mark considering the liberal use of them by your fans. I am prepared to be skewered because Eclipse was even a bigger disappointment than New Moon. 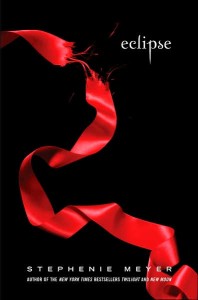 Eclipse continues the saga of Edward, the vampire, and Bella, his mortal lover. Bella is the narrator of this story, as she was the narrator of the previous two, Twilight and New Moon. The previous conflict is that Edward does not want to turn Bella into a vampire despite it being the only way for the two of them to be together. Because of the danger to Bella’s life by remaining human, Edward has reluctantly given in and the date for turning Bella is set for after graduation.

The conflict in Eclipse is the bringing to a head the artificial love triangle that you attempted to create in New Moon between Bella, Edward and Jacob, a werewolf. Werewolves and vampires are ancient enemies but since Edward’s family came into existence, an uneasy truce has taken place. Edward’s family are the “vegetarians” of vampire world, feeding off of animals instead of humans. The truce remains in place unless the vampires “turn” a local which is the plan with Bella.

Jacob, Bella’s bestfriend and werewolf, is hurting because Bella has chosen Edward over him. Much of the novel focuses around Bella and her interaction with the La Push werewolves. When Bella visits Jacob because he is “hurting” (from her rejection), he sees this as an opportunity to convince Bella that he is the better choice. After all, his heart beats and Edward’s does not. Edward is an abomination and Jacob is nature’s way of controlling those abominations. Bella, despite her love for Edward, goes on long hand-in-hand walks with Jacob; spends intimate quiet moments with him in the woods, allows him to put his head in her lap, pets his fur when he is changed.

Despite these continued intimacies, Bella declares that Jacob knows that they are just friends and Edward tolerates these visits because it is what Bella wants. And in this story, what Bella wants, she gets. She is the epitome of the Too Stupid to Live heroine. Her friends are werewolves and vampires, yet, when a major battle is to take place, she wants to be on the battlefield despite being told time and again her presence could be distracting. She insists on placing herself in danger to be a “help.” She is injury prone but dislikes taking precautions such as wearing a helmet while on a motorcycle or listening to Edward when he says that she should be careful of her person. Her “oh, I’ll be fine” mantra wears thin.

There is a suspense plot that weaves its way through the story. It’s a weak one as it is obvious to me and to anyone who has read the previous two books who is threatening Bella but it doesn’t seem to occur to anyone until the last possible moment.

There are many problems in this world besides the poor suspense thread. Previous sources of conflict wink out of existence. Edward could never stand prolonged intimacy with Bella as the desire to take her blood would overcome him. In Eclipse, Edward is simply over that. Bella has always longed to be a vampire. Yet, when it is offered to her, she changes her mind. And then changes it again. And then again. Another false barrier in the form of Bella’s desire not to be married is erected presenting still another weak excuse for internal conflict between Bella and Edward. It was clear to me that once the decision to remake Bella into a vampire was made, all natural tension evaporated and thus the author had to manufacture false conflict after false conflict to keep the storyline interesting.

You present Bella as a modern day Cathy with two good choices instead of two bad choices. The problem is that the choice, like the conflicts, is false. We know that Bella has no interest in Jacob and the relationship between them is fostered artificially. Bella feels the need to “be” with Jacob because he is hurting from her decision to be with Edward. Instead of a clean break, she continues to perpetuate Jacob’s belief that he can change her mind. I think at some point we are to feel sorry for Jacob yet, as he tells the story of wolf imprinting, it becomes clear that Bella is not the one for him, but the one he wants, which ultimately means that nature will take its course and heal Jacob, creating still another false conflict.

Edward is really a prop in this book. Any serious emotional interaction takes place between Bella and Jacob. Edward becomes a caricature, lacking any range or depth. The most interesting tales were the mythology behind the werewolves and the story of how Rosalie and Jasper, two of Edward’s vampire clan, came to be turned. The rest of the story was difficult to read, in part, because of Bella’s myopia and lack of self awareness, but mostly because the conflicts were manufactured. One of the most stunning examples of this is when Bella is sleeping but awakens in a fog to overhear a lengthy conversation between Edward and Jacob about how Edward doesn’t mind that Jacob is pursuing Bella.

It is hard to say at what point I realized that this would be my last Meyer novel, at least my last Meyer novel narrated by Bella. Bella is simply too immature of a character, the conflicts too false, for me to want to continue this series. The unnatural way in which this series was elongated through the insertion of this supposed love triangle has killed even my desire to re-read Twilight, which was one of my books of the year in 2005. C-