REVIEW: From London with Love by Jenna Peterson

Your series has been advertised as loosely based on the Charlies’ Angels and it was the reason that I picked up your book. What a novel idea (pun sort of intended)–women Regency spies. I have always been a fan of the franchise, both in its original ideation and in the modernized version. One of the things I love about Charlie’s Angels is the action and with the current version, the campy over the top nature of the stories. Other than the opening scene, however, this story crawled by slower than a snail on Prozac. 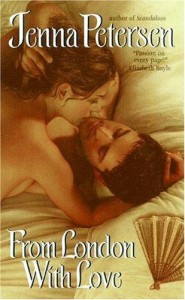 Meredith Sinclair, widow, is living an ordinary and routine existence when she is tapped to join a newly formed group of female spies. She undergoes two years of physical and mental training. Her next mission is her most difficult. She must investigate Tristan Archer, Marquis of Carmicheal, who once saved Meredith’s life. Tristan is under suspicion of treason and as much as it breaks Meredith’s heart to be the one to expose him, her duty comes first. Meredith, like any good spy, will do anything including trading on past relationship or current desire to get her job done.

The setup of this book sounds great as does the conflict. Meredith falls for Tristan but is torn between her duty and her desire. Tristan longs for Meredith but has his own secrets holding him back.

You clearly are full of good ideas and good plots. You remind me of Julia London. Everytime I read a blurb for one of her books, it sounds great and I want to buy it, but then I buy it and I am reminded that her writing doesn’t work for me. I have to say the same thing here. I kept thinking I should like this book, but somewhere after chapter three, I was bored. Tristan was particularly bland. I think he was supposed to be dark and full of angst but I found him to be, well, dull. Meredith, for all her outward trappings as someone who liked to live on the edge (after all, she is a spy), really exhibited none of the “fiery” interior she was described as having. Neither Meredith or Tristan was witty, fun, mean, passionate, fiery, angry, dark, charming, or even happy go lucky. They just were. The dialogue wasn’t much to speak of and existed merely to move characters from point A to point B.

“My lord?” she asked with a tilt of her head.
He started. “I’m sorry, my lady. Thank you for your kind words regarding both my losses.”
“I imagine they must have given you an increased responsibility. And at such a young age,” she continued.

“And that was many years ago, was it not?” Lady Carmichael asked. “It seems we have been two lonely ships. We have passed each other, but never on the same course.”
Meredith nodded. “Indeed. How pleased I am that we navigated to each other tonight.”
Her ladyship sighed quietly. “I’ve told Tristan many a time how I wondered about you these past few years.”

The book seemed to be classic example of the Avon Historcal machinery. The writing was polished but the voice or tone of the story lacked individuality. The characters seemed shallowly drawn and the key component of the Charlie’s Angels franchise (the sisterhood of the protagonists) was completely missing. The other “Angels” do not have much page time.

Neither character was honest with each other about their feelings which resulted in a Big Mis. The Big Mis was resolved quickly but even the speed at which this occurred seemed to contribute to the overall blandness of the story. You tried to keep an undercurrent of mystery alive by not revealing Meredith and Tristan’s past relationship, but the reveal was so short lived I couldn’t help but feel cheated.

This was a great idea that fell flat. I was never engaged. This may be a case of missed expectations. I was looking for a fun action book and got a regular Regency historical with little action. C for the book. Shirley Lyons loved it and so did Daniela, so as you know, each book touches readers differently.