Your books have come highly recommended from readers and reviewers whose preferences tend to coincide with mine, especially your mysteries. I kept hoping that Maloney’s Law, the first in a two-book series, would be released in e-format since the second had been, and the latter has languished in TBR Mountain in the meantime. But the new-to-you-author month of the Challenge called your name, and I decided to violate my OCD rules and read out of order. The Bones of Summer continues the story of Paul Maloney, whom we met in Maloney’s Law, but the story is told through the eyes of Craig Robertson, a model with whom Paul begins a relationship. 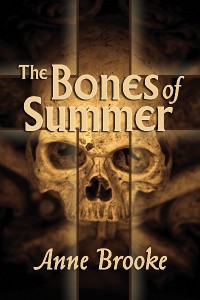 Craig is a young model who meets Paul at a club, and after a quickie they find themselves entering into a relationship (Craig eagerly, Paul much more hesitantly).   Almost at once, Paul’s profession as a private investigator becomes relevant when Craig receives a letter from an old friend and neighbor telling him that his estranged father has gone missing. He tries to tell Paul that it’s probably nothing, but Paul doesn’t believe him, and we soon find out that Craig has a far more complex past than he has admitted to Paul or to his friends. Craig’s London life is one he constructed from whole cloth after leaving his childhood behind. He was born Daniel Clutton, in Devon, to a religious fanatic father and a mother who left when he was a child. Craig soon comes clean to Paul and asks him to accompany him back to Devon to look for his father. There are no immediate clues as to where Craig’s father might have gone, but as they spend time in the village and especially in Craig’s childhood house, memories of the traumatic event that caused him to leave come flooding back. Craig had been growing intimate with a visiting Londoner, Michael, and the quarrel that ensued when his father discovered them led Craig to abandon his A-levels prep and bolt to London, a new life, and a new name. Michael has not been seen since, and Craig becomes afraid that he killed him. He asks Paul to investigate Michael’s disappearance. Paul and Craig’s search to find out what happened to Michael leads them to Craig’s father and the real truth, not only about Michael but also about why Craig's mother left.

The romance between Paul and Craig develops during their search for his father and their investigation into Michael’s disappearance.   You manage an effective balance between the mystery, Craig’s growing trauma, and the their relationship in the first half of the book. I believed in their increasing attachment and although they have very different backgrounds and personalities, I could see why each would be attracted to the other. The scenes between them were more often touching than especially sexy, but that fit the storyline. Paul’s greater maturity and experience created a somewhat asymmetric relationship, but the power imbalance didn’t really create problems until the last quarter of the book, when the focus is almost completely on Craig; the romance begins to take a back seat and then goes on hiatus while the mystery plot reaches its climax.

I found the first half of the book quite engaging, if overly long in developing both the romance and mystery storylines. Both Paul and Craig were well fleshed out as characters. Paul is more compelling, but Craig was clearly more than a hot blond model (although he was that too). And I really wasn’t sure where the mystery was going. The revelation of Michael’s role in Craig’s life and his disappearance added depth to the story, and the scenes with Michael’s sister were affecting. And your portrayal of the London and Devon settings are very evocative.

I found the second half of the story less convincing, even though the tension in both the romance and the mystery are ratcheted up considerably. The focus of the book is almost entirely on Craig and his past once his father comes back into the picture.   Paul and Craig become emotionally closer as they continue to investigate Michael’s past, but then Paul asks for a relationship time-out. I’m really not sure why; although he gives a reason, it isn’t an issue that changes over the course of the story so it feels a bit  ad hoc. Craig then continues to investigate on his own, which brings him into closer contact with his father but also accelerates his emotional unravelling. The last section of the book is straight murder-mystery, complete with over-the-top villain, shocking revelations, and grisly denouement. If I can figure out who the villain is and what the shocking revelations are going to be before they happen, then my guess is 90 percent of your other readers will too.

By the time I reached the end, I found that it was hard for me to categorize this book. It starts out as a romance with a mystery subplot and ends as a full-blown mystery. It starts as a book about a relationship but evolves into a book about Craig and his working out of his past traumas. We see everything that happens through Craig’s viewpoint, and nothing happens that isn’t directly relevant to what Craig is thinking and experiencing. I assume you made a stylistic decision to focus tightly on Craig’s story, but it becomes overwhelming at times, especially because Paul is at least as interesting a character. The romance is resolved off-screen at the very end, but the reader is denied the satisfaction of seeing the couple together, and the way it is resolved makes it hard to believe in an HFN, let alone an HEA.

Part of my skepticism at the HFN/HEA is because while we are shown how Paul and Craig come together, we are told more than shown how they fall in love and deepen their relationship. Throughout the book, Craig communicates in internal monologues, and at times a demonstration through dialogue or plot development would have been more effective.

Finally, this book would have been better had it been about three-quarters the length, with concomitant tightening of the plot and character development. There are scenes that go on too long, as well as scenes that could probably have been cut. This tendency toward flabbiness is something I’ve encountered regularly with Dreamspinner Press books, unfortunately. In spite of the telling-not-showing problems, the writing is strong and the characters and plot are well conceived. But a more ruthless editing pen would have improved the book immensely. As it stands, for each strength I can enumerate, I find myself countering with a corresponding weakness. Nonetheless, I’m glad I read the book and would recommend it to readers who like m/m mysteries and well-realized settings, as long as they can live with the caveats I’ve expressed.

→ Sunita
Previous article: REVIEW: Once Upon A Time in Space by Heather Massey
Next Post: REVIEW: The Trysting Place by Mary Balogh