When I decided at the last minute to join Wendy the Super Librarian’s 2011 TBR Challenge, I was relieved to see that the first month’s reading was category romance. When it comes to categories, my TBR mountain range can give the Himalayas a run for their money, and I’d been meaning to read your novel since it came out. Your choice of an NFL player as the hero was instantly appealing to a fan like me, and who can turn down a book in a series called Kimani Hotties? 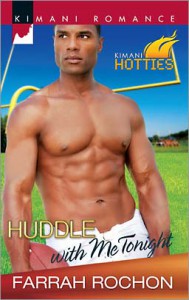 Olivia “Paige” Turner reviews books, restaurants, and plays in a blog for a weekly New York newspaper. Her latest blog post eviscerates a cookbook-slash-memoir by Torrian Smallwood, the star wide receiver for the New York Sabers NFL football team. When Torrian hears about the post, he worries that the negative review will adversely affect the opening of his new restaurant, for which the book is meant to provide publicity. He’s not worried for himself so much as for his sister Dee, a chef who sacrificed her own ambitions so that Torrian could finish high school and take advantage of a football scholarship. The Fire Starter Grille is Torrian’s way of helping his sister realize her dreams. When Torrian impulsively comments on Paige’s negative review, he begins a blog feud which attracts wide attention and leads to a cooking competition between the two of them on a local morning program. Torrian is attracted to Paige from the moment he sees her, before he knows who she is, and during the cooking competition he is finally able to break down her defenses and convince her that he isn’t a self-centered, arrogant jock who only cares about himself. The sexual attraction and tension is well done, and the scenes in which they finally act on their feelings are rewardingly hot.

I really appreciated the portrayals of Torrian and his friend and teammate Theo. You nailed the characterizations of NFL football players; Torrian and Theo are smart, committed, and forward-thinking about their careers and what they will do after retiring. I can easily see these two mastering the team playbook (which makes the NY telephone directories look like a pamphlet), and it’s nice to see characters who remind us that there are many admirable players. Theo’s post-retirement plans and Torrian’s fears about his eye problems mirror the kinds of concerns I’ve observed players to have in real life. I also appreciated that you signaled that Torrian’s ophthalmologist (and Theo’s sister) was gay without making a big deal about it. The way you have Torrian and Paige first meet sounds like something that could happen in real life, and your depiction of the relationship between reviewers and authors was sympathetic and amusing.

I enjoyed the early chapters of the book despite the fact that I kept finding little errors in word usage; these really should have been caught by an editor or in the editorial process somewhere. You also made a couple of minor errors of substance, for example, a New York NFL team would be in the NFC East, not the NFC North. And I’m still wondering why a young, hotshot football star would drive a BMW 580i (have these even been made in the 21st century?) But these niggles didn’t pull me out of the story. As I kept reading, however, there were bigger problems.

First, the way you dealt with Torrian’s injury was key to the plot but was off in a couple of ways in terms of NFL policy. This wouldn’t have been an issue, ironically, if you hadn’t set the football context so well early on (I loved the scene of Theo, Torrian, and Cedric playing dominoes in Torrian’s man cave). Partway through the book, Torrian suffers an injury during a game, which puts him on Injured Reserve and gives him the time to compete with Paige on the morning show. Torrian says he can do the show because he’s off for the next five weeks, except for team meetings on Tuesdays. But players on IR are off for the whole season, and they can’t attend meetings or practices. Even worse, he tells a reporter that

"The only reason doc wants me to sit out is so I can rest up before the playoffs. The team is in solid position for the NFC North's top spot. There's no need to risk me getting further injured."

If a player said this, his team would run a major risk of getting fined by the NFL head office; the reason the IR rules were changed in the 1980s was because there was concern that teams were gaming the system. Also, I can’t imagine an injured player going for a long run in Central Park without getting seriously chastised by his team. Football during the season is incredibly regimented, even for injured players.

These mistakes are probably only going to bother serious NFL-heads like me; non-football types are likely to gloss over them and enjoy the good parts. More problematic, though, is the character of Paige. She begins by writing a snarky review, criticizing Torrian’s book in ways even her boss suggests are unfair. After Torrian posts his comment, he has second thoughts and emails her to ask her to delete it, but she doesn’t see the message because she only checks her blog email once a week. This makes no sense to me; the blog is her career, and she is ambitious, but she doesn’t monitor the email? Of course, if she had, the plot couldn’t have advanced. But if I was troubled about that inconsistency, I was more bothered that Paige barely apologized for the lapse in professionalism.

Page goes on and on about her integrity; at first she refuses to date Torrian because she doesn’t want people to think she’s trading on his fame, and then once they get involved she insists they keep it secret. But at the same time, she has no problem accepting free meals from restaurants she plans to review, and she is apparently going to review Torrian’s restaurant after they start dating! Holy conflicts of interest, Batman!

But the story really went off the rails for me in the last third, where Paige’s actions seemed even more out of character and several plot threads just disappeared. Paige and Torrian become hotly and happily involved, but the book isn’t over, so something has to come between them. Torrian’s eye problems are leaked to the press, and he immediately blames Paige and tells her to take a hike, even though he has no reason to believe she was the leaker. Huh? This yummy hero, who has been nothing but patient and caring toward everyone throughout the book, suddenly jumps to the wrong conclusion and turns into Mr. Hyde? I didn’t buy it. And all the worries he had about the career and publicity consequences if the news came out? You show us none of it. We never see the repercussions, and his career issues are quickly and happily wrapped up. The post-playing career you give him is certainly plausible, but why set up the downsides and then fail to follow through?

Paige, in the meantime, is hurt and angry at Torrian’s accusations. But rather than going back to her life and waiting for him to come crawling back, she suddenly decides that he may have been justified:

Paige thought about some of the other things she'd done to further her career, like writing reviews geared more toward what she knew her readers would want instead of what she'd truly felt in her heart. She'd compromised the value she held most dear-‘honesty. How could she blame Torrian for thinking anything different of her?

He had every right to point the finger at you.

No, he really didn’t, not the way you wrote the preceding 90% of the book. Even if I thought Paige was less principled than she herself did, her certainty in her own integrity is a recurring theme. If she’s going to question herself at the end, you need to foreshadow more clearly in the earlier stages by showing her questioning some of her own decisions.

By the time I got to the end, I was pretty dissatisfied. I was especially disappointed because parts of the book worked really well for me. Your New York and NFL setting was well depicted, Torrian was a mensch, and the supporting cast was terrific. Speaking of which, what happened to the budding romance between Theo and Dee? Are you saving that for their own book? Because they definitely deserve each other.

I will mostly likely pick up your next book, because I think all of these problems are fixable. Your writing was a little clunky at times, but at others it flowed smoothly. You have a great way with heroes, and your depiction of Torrian’s and Paige’s backgrounds and family life felt authentic.

And thanks also to Wendy SL for getting me to read from my stack of Kimanis. It definitely won’t be my last foray into the line.