REVIEW: The Vampire and the Virgin by Kerrelyn Sparks 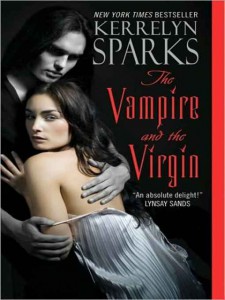 Seeing the title of your book, I couldn’t WAIT to find out exactly why a modern woman in a paranormal would still be a virgin. Anecdotally, I’ve found that virgins in paranormals are rare, and finding one is like hitting the lottery, even more so if the reasoning behind the retention of virginity is plausible within the construct of the storyline. This one worked for me…sorta. This is the eighth book in the Love at Stake series and I haven’t read any of the previous books.

Olivia Sotiris is an FBI psychologist that’s been sent on a forced vacation to the Greek island of Patmos. She’s staying with her grandmother and attempting to forget a serial killer that has fixated on her, threatened her, and scared the daylights out of her. But since he’s in solitary confinement, it’s nearly impossible for Olivia to get her FBI colleagues to believe that the killer is the one psychologically toying with her. So she agrees to escape to Patmos, suffer her grandmother’s attempts at matchmaking and try to forget about her job and her troubles.

Robby MacKay has been sent to Patmos by his great-grandfather (?) to regain his strength and get out of his own way after his capture and torture by the Malcontents (which I believe happened in the previous book). Robby is so focused on killing Casimir, the leader of the Malcontents, that he could end up putting his family and friends in jeopardy. He’s refused any sort of help, so MacKay Security & Investigations has shipped him off to Greece to cool his heels.

Robby and Olivia meet on the beach at night (duh) and he is immediately taken with her. Olivia is both fascinated by and suspicious of Robby because he’s the first person she’s never been able to “read”. Olivia is like a human lie-detector, a psychic trait that has been passed down through generations (her grandmother has the same ability), and works for the FBI to ferret out killers, bad guys, and what have you. And here’s my problem: this vamp/psychic mixture comes very close to the Sookie Stackhouse books. However, TVATV is written in a completely different style from the Stackhouse novels, so I made an effort to overlook it.

Earlier, I noted that this was the eighth book in the series. There were secondary characters that had definitely had their own books in the past, but the way the book was written allowed it to stand on it’s own. While I enjoyed reading about Robby and Olivia’s relationship, there were a lot of fits and starts due to Olivia’s suspicion growing since she couldn’t read Robby’s truthfulness and Robby’s efforts to hide his Vampirism from her. I also spotted the bad guy as soon as the charater showed up in the book. This book felt a bit like “Vampire Lite”. So many of the paranormal books I’ve read have been heavy or dark with incredible amounts of worldbuilding. This was written more like a contemporary but there were a few curveballs, one of which is that some of the characters were Vampires and Weres. Vampire Lite isn’t a bad thing, but there was nothing compelling me to return to MacKay S&I and the Malcontents. C

| Nook | Barnes and Noble | Borders |
Fictionwise | Books on Board