REVIEW: Yours, Mine and Howls by Kinsey Holley

Thank you for sending your book to Dear Author for review.   I totally loved the excerpt that was sent and I waited impatiently for the rest of the book to be sent.   I am a big fan of pack stories because I love the pack dynamics and the feralness of the characters.   While there are pack issues and appealing leads in this romance, I struggled to see the connections between the emotional leaps that the characters took.

Allison Kendall, a human, lives in the trailer next to Guy and Gracie Fontenot.   Guy is a werewolf with a quick temper and Gracie is free with her favors.   This volatile combination ends tragically when Guy kills Gracie and then comes after Allison who had been housing Dylan, Gracie’s son and the boy Guy had called his own for five years.   That night changes Allie’s life forever. 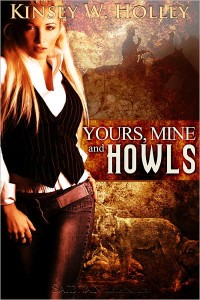 When Dylan grows older, he shows signs of being an alpha wolf. He needs a pack.   Allie and Dylan’s uncle Seth receive an invitation for Dylan and Seth to meet with Cade MacDougall, an Alpha of the Rocky Mountain Pack headquarted in Fremont, Colorado.   Cade’s pack contained a number of Alphas, lones and outcasts – the perfect place for lone wolf Seth and the burgeoning alpha wolf Dylan.

The worldbuilding in this story is not the basic werewolf created by disease but is actually tied to old Norse legends wherein the Old Norse word for wolf translates into Valkyrie Horse.   Valkyries and their mounts were metaphors for the ravens and wolves that would scavenge the battlefield. (It should be noted that I only know of this legend because I played Lara Croft Tomb Raider: The Underworld about a month previous which was based on Norse mythology).   The wolves in Yours, Mine and Howls are touched by Eir, a norse goddess, and Cade’s line, in particular, is favored by Eir. I found the norse touched were mythology interesting and appreciated the freshness.

The real problem, as I mentioned in the beginning, was the emotional arcs.   Allie and Cade meet and move from lust to love in pages without meaningful transitions. We go from Allie being irritated that Cade and another Pack member finds her sexually attractive after she overhears them talking about her assets, but then in the next scene, when faced with Cade’s glorious good looks, she is breathless and agog.   Cade himself decides no sex with women in the Pack, particularly around his young daughter.     Cade’s intentions are soon forgotten.   I wished I had some scenes in which I could have seen the emotional transition being made.     There lacked a smooth flow from emotional scene to emotional scene, making the book almost episodic in feel, like I was reading a series of vignettes strung together.

I didn’t really enjoy the protrayal of Allie.   She’s physically gifted with heightened senses and preternatural speed and strength yet she is always blushing and crying around Cade. She is actually referred to as an alpha in her own right and regularly yells at Cade.   Despite this, I felt she came off as weak and posturing.   I had wished that she had a little more self confidence and appreciation of herself as a woman and an individual who had pretty much raised Dylan and kept her little tribe together for thirteen years.

Cade was a fairly typical Alpha male pack leader whose primary characteristics appeared to be portrayed through his uncertain pursuit of Allie. I did think that Cade’s four year old daughter was adorable as were his interactions with the daughter.

There is an intriguing story behind Allie’s power and a connection between Cade and Allie that is bound in myth.   Unfortunately, much of that story is told through long bursts of dialogue in the middle and toward the end.   In the end, I didn’t feel like this story lived up to its initial promise. Your voice is strong and I am ready to try out your next story. C

→ Jane
Previous article: REVIEW: What I Did For A Duke by Julie Anne Long
Next Post: Wednesday Midday Links: How are Apple’s recent demands going to affect me?