Warning: mysqli_query(): (22032/3141): Invalid JSON text in argument 1 to function json_contains: "Invalid value." at position 0. in /home/customer/www/dearauthor.com/public_html/wp-includes/class-wpdb.php on line 2187
 REVIEW: Yours for the Night by Samantha Hunter
October 30, 2012

REVIEW: Yours for the Night by Samantha Hunter

Garrett Berringer is a widower of 6 years. After his wife’s death, Garrett focused on building his security business with his brother Jonas – Berringer Bodyguards. 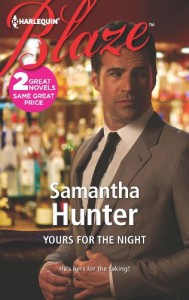 Tiffany Walker is a private investigator who spends her time trying to get photographs of cheating husbands when her original dream was to capture nature shots that would be featured in dozens of national magazines. She hasn’t told anyone about her new venture because she’s had so many failed ones in the past. She works in her parents’ jewelry store during the day.

The guy carries around his wife’s obit in his wallet. Not sure that indicates that he is over her. Every other thought seems to be a memory of her. Maybe it is likely that at a wedding, thoughts turn naturally to the widow’s previous ceremony even after he’s spent the weekend tumbling one of the bridesmaids. But I had my doubts whether he would ever feel as strongly about a second wife, no matter how verbal his declarations.

But we proceed apace to the wedding party sex and then the post coital conflict. These were two decent, if bland characters engaged in a bland romance that borrows its energy from a subplot involving a ring of jewelry thieves.

Garrett is all up in Tiffany’s business, trying to find out her secrets and then worrying about her safety.

I felt for Tiffany but she also came off in over her head, either because she lacked actual experience or she lacked confidence. This is how I felt about Tiffany investigating the jewelry theft “She hoped she could use some female charm on him the way female TV detectives did all the time.”

Indeed. We are essentially watching Tiffany gain experience but her ineptitude at times has me cringing. She really shouldn’t be investigating jewel heist when she can barely catch a cheating husband with his pants down. Maybe if she was running around doing something less dangerous, I’d be more sanguine about her complete lack of PI ability. Or maybe if it had been played for laughs instead of seriousness.  C