The setup is corny but amusing.  Elle Walser decides to creep into her boss’ bed and seduce him and instead ends up with his brother, Gabe Schultz. 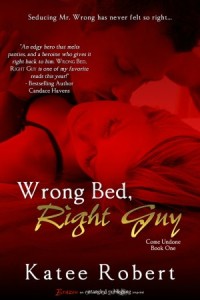 Crawling into her boss’ bedroom and trying seduce him even though he has ignored every overture takes some brass ovaries. And I liked it that she was both appalled at the guy’s behavior when she discovers it is the wrong guy instead of falling on top of him again. After all, what kind of guy does decide to have sex with a completely random stranger who feels him up while he is sleeping?  But what kind of girl sneaks into her boss’ bed?

Elle believed her boss, Nathan Schultz, was her dream man. Sure, he was in the military before but now he is an artist and owns a gallery.  He searches out new and aspiring artists. She believes him to be refined and perfect for her and if she can show him how compatible they are physically, he will fall into place as her ideal life companion.

Unfortunately, the man she seduces is Gabe, the tattooed older Schultz brother who owns a string of nightclubs along the West Coast.  Once Elle sees Gabe’s tattoos, she believes that she has leapt into bed with Lucifer himself.  Elle had her heart broken by a tattooed boy in high school and ever since then, despite the years that have passed, she assumes tattoos = the devil’s handiwork.  Okay, Elle doesn’t use the word devil but she might as well have.  Elle has mommy issues as well that she uses to shield herself from the unrefined.

The major problem is Elle. She was a real snob and I didn’t really understand why. After all, she grew up on a farm but eats french fries with a fork; looked down at the hero for taking her to a tavern for hamburgers; assumed tarted up girls were prostitutes; and assumes all tattoed men are “bad boys”. In fact, when she goes to the beach with the Schultz brothers and sees tattoos on Nathan’s lower back, she immediately assumes that he is no longer the refined gentleman that she assumed him to be.  Just because he has tattoos. Never mind that she worked with him for years and was willing to seduce him in his bed.

In many ways, she reminded me of that sales lady in Pretty Woman who refused to help Julia Roberts and after she spent a ton of money, Roberts comes back in and says “big mistake”:

and look, through the magic of YouTube, here is that scene.

There is even a scene similar to that when Gabe first comes into the gallery and Elle presumes he doesn’t have the money to buy any art there.

“You—” Her eyes blazed, mouth drawn into a tight line before she smiled at him. Funny, she still looked pissed as hell despite the fact that her lips curved up. “Which piece were you considering?” Elle’s tone said she doubted he could afford it.

The dismissive attitude stung his pride. This chick didn’t know a damn thing about him. All she saw was the busted face and tattoos, and assumed he was trash. The truth was Gabe could buy every single painting in this goddamn gallery and still be sitting pretty.

Gritting his teeth, he turned toward the paintings near the front window, and played along. “These ones caught my eye.”

He waited to see if she’d dismiss him, but Elle sighed and her heels clicked on the floor as she came over.

“They can be.” Elle shrugged. “It’s up to you if you want to spend the money to acquire them all.” Again, her tone said she was humoring him. “They certainly seem to suit you.”

Gabe, however, was a charming guy. Yes, he almost slept with a stranger but he was super sweet to Elle and every activity he undertook from buying her flowers, to taking care of her when she was sick, was kind and generous. If he wasn’t so kind hearted, I probably wouldn’t have finished the book.  The book is largely driven by Elle’s assumptions and misunderstandings yet for some reason, she is exactly what Gabe wants.  I’m not sure why nor, by the end of the book, did I care.  I am sure there are better women out there Gabe.  C