REVIEW: With Everything I Am by Kristen Ashley

2012 was definitely “The Year of Kristen Ashley” for me. I read about 20 of your books. And then I read most of them again. Generally speaking, your contemporary romances work better for me than your paranormals, as I find your world building to be occasionally half-hearted. I don’t say this as a criticism so much as I believe that you’re wholeheartedly focused on building the romance between your protagonists, and building a paranormal world draws your attention from the romance. 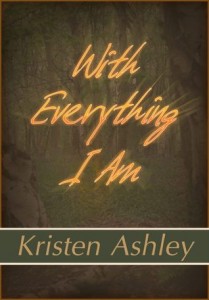 With Everything I Am tells the story of Sonia Arlington, the daughter of a well respected Senator,  and Callum, the King of Werewolves. Sonia was orphaned at a young age after her parents were killed in an auto accident. She’s always loved nature and has an affinity for animals. She can sense them when they’re near and can call them to her at times. When she was a child, she saved a wolf (Callum, of course) from being hunted, and since then has often dreamed of her “puppy”. As she got older, her “puppy” would, on occasion bring her “wolf” to her, a dream man who would begin to make love to her, but she’d always wake up before they got to the good stuff.

Sonia has grown up being raised by Gregor, who is a cold standoffish man who she knows loves her, but is not very affectionate. His son, Yuri, on the other hand, is a little too affectionate – Sonia knows he’d like to marry her.

Callum is leading a nation on the brink of war from a band of rebel wolves. His mating has been foretold for years, and he’s been waiting for Sonia to reach an appropriate age to woo and claim. Sonia is human, so Callum must be very gentle and careful in how he introduces the idea that he is a werewolf. His plan is accelerated when Sonia is grabbed one night by the wolf  rebels and is nearly raped. She’s saved by Callum, whose spies had sussed out the attack, and thus begins their courtship. Callum takes Sonia to her childhood cabin and attempts to woo her. But he goes about it all wrong, being autocratic and high handed, leading Sonia to resent him, despite her intense attraction to him. He’s ham-handed in his handling of her, and ends up claiming her during sex. Sonia really has no idea what this means (He asked, “Are you mine?” and she says “Yes” – BOOM – Claimed/Mated) and is understandably pissed off when she finds out. Thus Callum being to slowly explain to Sonia about his “people” who  he says are a different species than human. He tells Sonia that the Claiming cannot be undone, and that she is now tied forever to him.  Sonia is beside herself. She’s deeply attracted to Callum, but he’s ripped her away from everything she knows and is insistent that she adapt sooner, rather than later, to all that he’s told her. He takes her to his castle in Scotland, his people’s stronghold, and informs her they’ll be settling here and she’s now Queen of his people. Sonia is forced to acclimate again and does her best to deal with Callum’s dictates and adjust to the many changes he’s brought to her life, all while fighting her growing feelings for a man who only seems to order her around.

This book is quintessential Kristen Ashley. Callum is off the charts alpha. He’s high handed, he’s bossy, he’s autocratic, and frankly, a bit of an ass. And yet, through it all, I found myself understanding why Sonia was falling in love with him, all while also wondering why she didn’t just kick him in the junk and order him to get over himself. Sonia is one of my favorite heroines you’ve written. She’s smart and willing to defend herself when she feels she’s been wronged. She navigates an unknown culture really well, and finds ways to put her stamp on a community that is completely paternal. Callum was harder for me to become attached to. He was extreme to me in many ways. Impatient and argumentative, rarely showing compassion for all that he was putting Sonia through. He constantly insisted that Sonia adapt, adhere to his rules, and generally subvert her questions, thoughts and feelings for what he wanted. This was not heroic behavior to me. And yet through it all, I  found myself believing that he loved her.  It’s a conundrum for me, as I truly liked your heroine and was not 100% convinced that the hero deserved her.

I found With Everything I Am to be quite cleanly copy edited, which your readers  know has been a weakness in the past with your books. The book is very long, which was unnecessary. There were several places that I though the book would be wrapping up, only to find that I was roughly 58% through the story. Despite its length, there were several threads that were extraneous. For example, why even have Sonia own a shop, and stress that it was terribly important to her, only to have it be dropped as a story line?  You also set up Yuri, Sonia’s adopted brother as a possible rival to Callum for her hand, but then never went anywhere with that thread. The paranormal aspect of the book is easily its weakest part. The werewolf culture is very haphazardly explained, with only occasional elucidation of why things were happening. Also, Callum and Sonia are part of some sort of Prophecy which has them banding with two other couples (Lucien and Leah from Until the Sun Falls From the Sky and a TBD other couple) to save the world. This is the weakest part of the story, as there seems to be no actual urgency about the Prophecy and no inherent danger or ramifications to what will happen if they fail.

All of this being said, I started this book at about 7 p.m. one night and read until after 2 a.m. in order to finish it. Your writing is as crackalicious as ever and in the end, I went back and re-read the story again. So while I don’t think it’s your strongest work, I found it to be every bit as addictive as others by you. I think your regular readers will find the book entertaining and will be willing to overlook some obvious weaknesses. Readers who have never read a book by Kristen Ashley would be far better served to start with either your Colorado Mountain series or your Dream Man series.  In the end, I found With Everything I Am to be compulsively readable, yet weaker entry in the Kristen Ashley oeuvre. It gets a C from me.