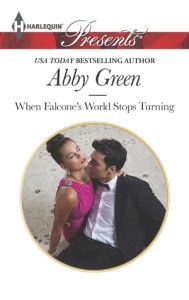 When I’m in the mood for an archtypical Harlequin Presents story — here taking the form of cynical Italian tycoon + secret baby + punishing kisses = angsty-goodness — I look for Abby Green. Originally I decided against reviewing this for Dear Author, because, well, it’s a formula, and you like it or you don’t, and unless you want to do a critique of the entire genre there’s not a whole lot new to say. But then I was interested to notice some small signs here and there of the more modern spirit that’s been popping out in the Presents line lately.

(I go pretty thoroughly into the plot — there are no major spoilers, but if you really like to be surprised, you might not want to read on.)

The story opens with a bang, as Rafaele Falcone and his half brother discover the existence of another previously unsuspected half-brother, at their mother’s funeral. Disappointingly, this mostly sets up the series and doesn’t play into the plot much. Shortly afterwards, researcher Samantha Rourke is horrified to receive a phone call from her former boss and lover Rafaele, asking her to come work for him again. This inevitably leads to Rafaele discovering the existence of their young son, Milo.

The first intriguing thing I noticed was how much the plot is convoluted to make the secret baby aspects more palatable. Rafaele had thought Sam had miscarried, and his reaction to her pregnancy was so negative — the stress even bringing on more dangerous cramps! — that she allowed him to continue believing that. She’s not entirely comfortable with her decision though, and later admits that a desire to punish him for dumping her (and apparently immediately taking up with another woman) might have influenced her. Sympathetic but not blameless — it’s a delicate balance that’s more complicated than we normally see in a short category. Rafaele’s reaction is far more conventional: although he’d been horrified by Sam’s pregnancy, when he discovers he actually has a child he instantly wants full-time fatherhood. I suppose this is intended to make his side of the story more palatable as well, but given that he has Major Issues around parents and children, it would have been good to see him process some.

Another small but significant point: Sam didn’t become downtrodden and poverty stricken after their relationship ended (despite having been dumped by her boss, a point which is not addressed.) With the help of excellent childcare, she went on to earn her doctorate, and she works in a male dominated field, auto engineering. (The coolness of this is somewhat mitigated by Sam having become a tomboy to please her father; she loves how Rafaele makes her feel feminine.)

The main way this story differs from its brethren is… wait for it… Sam actually had sex with someone else while they were separated. It was only one time and God forbid she should enjoy it, but still, this is huge; I’ve encountered only two other instances in Presents. (Even when the heroine actually marries someone else, it’s still pretty damn rare!) Rafaele is also much less of a horn dog than he’d appeared; he was never able to forget Sam. It’s not a complete overhaul of the sexual double standard, but baby steps! (It’s kind of hilarious, in an awful way, to see the response to this plot point on GoodReads — Sam is characterized as a slut and a terrible mom, having sex with strangers “like a hooker.” One time, with a man she’d been dating, makes her into that. No wonder Presents have been resistant to change.)

As for enjoyment value… this didn’t hit the ball out of the park for me as much as usual. It may be because this particular one isn’t really my formula, but even with the updated elements, it felt a little tired. I’m not sure it’s the formula that needs refreshing as much as the language, or perhaps it’s the combination of the two: Rafaele’s desperate exhortations to himself to keep control, Sam’s weak limbs whenever he’s near, even his unbearably attractive stubble — all this is very familiar.  It was entertaining enough, and I’ll hope for a stronger twist to the gut in the next book. C