REVIEW: We Were Liars by E. Lockhart 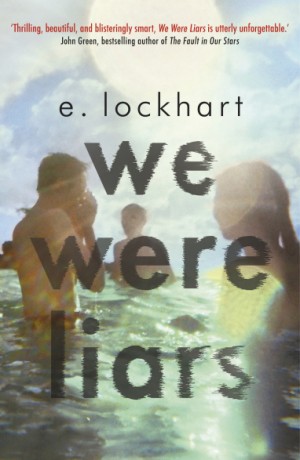 Something I plan to do this year is review more “older” recent books. Don’t get me wrong. It’s nice being able to review new releases. Especially the part where I can recommend the ones I like to readers and seeing those readers like them, too. That satisfies me.

But I miss being able to discuss books with other people, and I find that hard to do with new releases. So I’m trying this out in 2015 in the hopes of spurring more discussion.

The first book I picked for this experiment is We Were Liars by E. Lockhart, which came out in the middle of last year. I meant to get to it, but I’m sure you all know how the TBR pile goes. That clearly didn’t happen, because I’m reviewing it now, several months later.

Despite the fact it is months later, I stayed pretty spoiler-free about the book. Surprising, considering how many people read it and kept talking about it. It was just very hard to miss. In the end, I went into this book knowing two things: it was a contemporary, and there was a twist. And since there was a much-touted twist, I assumed it was a mystery or a thriller of some sort.

All of these things are true. In fact, I think knowing there is a twist might have ruined the book for me. Because I saw the twist coming from almost the beginning, and didn’t even realize it was the much-touted twist until I went to read reviews after I finished, because I was completely confused and thought I’d missed something major.

We Were Liars is about Cady, the eldest grandchild of the Sinclair family–which is a very rich, privileged, white family. But like many fictional rich families, the Sinclairs have issues. Cady’s mother is one of three daughters, and they’ve been squabbling over their inheritance. The Sinclair patriarch is…special, making his daughters jump through hoops to prove their loyalty and earn his benevolence. And the grandchildren, including Cady, are caught in the middle.

For the past couple years, however, Cady’s been suffering from excruciating migraines. Her memory of the last summer she spent at the Sinclair ancestral home, two years ago, is fragmented. For as long as she can remember, she’s spent those summers with the other Sinclair grandkids: Mirren and Johnny, along with Johnny’s friend/sort-of cousin, Gat. They’re tight. But the one summer she doesn’t spend with them on the family island, they don’t answer any of her emails or phone calls.

Cady wants to know what happened the summer when everything changed: why she was found floating in the water, why the others didn’t keep in contact with her, and why her mother and aunts insist on keeping secrets from her. And piece by piece, she’s going to find out, whether her mother, aunts, grandfather, cousins or dear-friend/something-more like it or not.

I think there’s a danger in knowing a book has a twist when you go into it. It makes you hyper-aware that something is coming. I don’t know how other readers’ brains work, but mine definitely chews on stuff in the background as I read along. And in a post-Sixth Sense world, I think media consumers have learned to pick up on clues.

The fact I picked up on the twist pretty early on does compliment Lockhart’s ability to drop clues into the narrative. The problem is that because I figured out what was really going on pretty quickly, I didn’t have the transformative experience when the truth was revealed. I’m a little sad about that, because if there’s one thing I like, it’s experiencing that moment where everything you thought you knew changes. Sadly, that didn’t happen in We Were Liars.

In the beginning of the book, we learn that Cady has these horrible migraines that drugs don’t really help all that well. They’re the result of an accident and possibly a traumatic brain injury. Based on all these facts, a red flag immediately went up in my mind. Is this going to be another oh, she’s just “crazy” book? Is Cady simply hallucinating and seeing things because of her brain injury? What horrible thing is she responsible for?

All those questions sprang to mind. You read enough books and after a while, pattern emerge. And while they’re not quite accurate, they’re still close enough that the revelation wasn’t anything of the sort.

I’m interested in hearing from other people who’ve read this book. Did they have a similar experiences as me or was the plot twist indeed a plot twist? There was a lot of chatter about this book, so I can only assume the latter was more prevalent, but I want to hear from actual readers.

We Were Liars is an extremely quick read. I read it in a couple hours. I don’t feel like I wasted my time, but I also don’t know that I plan to pick up another Lockhart book. C

→ Jia
Previous article: REVIEW: Assimilation, Love and Other Human Oddities by Lyn Gala
Next Post: GIVEAWAY: An Ember in the Ashes