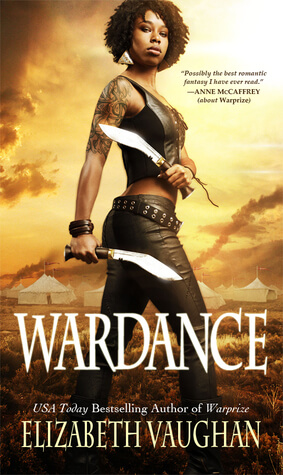 I was so excited to see Wardance was coming out, I begged Jane to get me a review copy. I loved the Warprize series and it’s been a long time between drinks – I read the previous books all at once in 2011.

Ultimately, that was my major issue with the book in fact: I couldn’t remember enough of what had happened in the previous books to fully understand what was happening in Wardance. This is not a stand-alone book. It won’t work at all for people who have not read the previous books. In fact, I’d recommend a re-read of all the previous books in the series to truly appreciate Wardance.

Wardance is the story of Simus of the Hawk, a close ally of Keir of the Kat and a true believer in Keir’s plans to unite the people of the Plains and the Xy, and a Warrior-Priestess, Snowfall. Simus is headed to the Heart of the Plains from Xy, on a mission for himself and for Keir. He will challenge for the position of Warlord and seek to further Keir’s plans to unite his people with those of his Xylara (his wife).

In terms of timeline, Wardance begins before the end of Warcry – the beam of light coming from the Heart is seen from the Plains. It has a devastating effect on the Warrior-Priests gathered there – most die in one way or another. It also awakens magic in the land, something Snowfall and her mentor, Wild Winds appreciate quickly.

In previous books Wild Winds was very anti Keir’s plans. However he has now had a change of heart. He releases Snowfall from his service and bids her to, watch and learn about Simus and then challenge for the position of Token-Bearer. Snowfall is reluctant but ultimately does as he orders.

There is a lot of confusion in the Plains about the Sacrifice and the beam of light; clearly big things are happening. Many of the tribes are afraid and inclined to blame Keir for the upheaval (based on exactly zero evidence but since when does that matter when people are frightened?) and, by proxy, Simus.

As Snowfall watches, she sees a man of honour, good humour and strong work ethic. He shows exemplary leadership skills and he’s extremely pleasing to the eye as well.

Simus is extremely surprised by Wild Winds’s apparent change of heart about Keir’s goals and even more so when Snowfall challenges for Token-Bearer. But he’s prepared to trust her a little and see if that trust is misplaced. Others in his cadre are not so open and there is dissension in the ranks as a result.

There are also a few scenes with Keir, Lara and Amyu in Xy. The wyverns, which appeared in Xy at the end of Warcry are causing havoc. At least in Xy the people can take refuge under roofs – what would happen if the wyverns headed out to the Plains?

The romance between Snowfall and Simus didn’t wow me. I didn’t really see their growing affection. I saw a growing respect but the spark of attraction was missing for me. After they’d confessed that attraction, things were more satisfying and the last 80 or so pages of the book was much more enjoyable from both a romance and fantasy perspective. However, there was a good bit missing for me between respect and “I love you”. I got it with Keir and Lara but it was absent for Snowfall and Simus unfortunately.

I struggled to read Wardance, mainly because I couldn’t remember a lot of the plot of the previous books. I referred to reviews I’d written and asked a few questions on Twitter but a lot of the nuance went right by me. I spent a lot of my reading time confused. As a result, I found Wardance incredibly easy to put down.There wasn’t enough of the romance to really hold my interest until very late in the book and everything else needed a lot of prior knowledge to understand. There was no recap or glossary or help for those of us who haven’t picked up a Warprize book since 2011. There have been more than 600 books for me in between then and now. I don’t have an eidetic memory unfortunately and so I spent much of the book pretty lost.

I expect that, had I had time to read the series again and gone straight into Wardance, I’d have enjoyed it a lot better. The story is a continuation of the series and in fact, the romance between Simus and Snowfall is really quite secondary to the fantasy plot. A lot happened but I fear much of it went over my head. I still need to go and look up the significance of the Sacrifice because I’m sure I’m missing something.

The fantasy plot does not end in Wardance either. It is clear there is much more ahead. I hope to do a series re-read before the next book comes out – maybe then I’ll understand all the things I missed here and won’t end the read still a little baffled.

It’s difficult to grade this book. It wasn’t bad – I think it’s more a fantasy book than a fantasy-romance but that doesn’t make it bad. If I’d remembered enough about the series going in, I’m sure it would have been far more successful for me. Perhaps around a B or B-, given the romance felt a little lacking for me. As it is, I’m going with a C.

→ Kaetrin
Previous article: REVIEW: The Spirit of the Age and Other Stories From the Home Front by E M Delafield
Next Post: Monday News: Rebuilding Mosul library, Mastodon, reading books you hate, and the odour wheel