When your debut book, Warprize, entered the market, it was 2005. High fantasy romance wasn’t (and still isn’t) thick on the ground. I fell in love with Lara, the Warprize, and Keir, Warlord, and their attempts to teach each other the best of the urban and plains’ worlds. A couple other books followed and then the series was abandoned while you explored other storylines. Warcry is essentially a return to Lara and Keir’s storyline only told through Heath, a city dweller, and Atira, a Plains warrior. 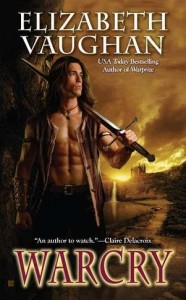 The backstory of Warprize can be read a bit in Jayne’s review linked above but essentially Lara is the Queen of Xy who was offered as a prize to Warlord when Keir attacked the city of Xy. The two fell in love and together they have begun to forge a new society combining the best of both the city cultures and the Plains cultures. But integration is difficult and while many in Xy welcome the return of Lara and to witness the birth of her child, the future ruler of Xy, others plot against Lara and harbor resentment against the Plains’ warriors.

Heath departed to protect Lara when she was offered as Warprize and fell in love with Atira. He has asked her to bond with him, which is similar to marriage in modern society. Atira resists. First, because it is not the nature of the Plains people to form close bonds with any one person. It is a freer culture sexually and only special people form a bond, people like Lara and Keir or other warlords. Bonded pairs are considered unique within the Plains’ culture and Atira does not understand why Heath cannot be satisfied with simply sharing her blankets.

For Heath, his idea of love is wrapped up in his societal expectations. In Xy, people wed and make promises to love and cherish only one.

The social commentary in this series has always been one its bright points, something that set it apart from other books in the genre. There are good customs and bad customs in both societies. In the Plains, there are people of every color because and no one’s sexual preference is deemed unnatural. Many of the Plains are quick to anger but also quick to forgive, using systems of “tokens” to speak freely without giving offense. In the city, however, they are harnessing the elements of the earth to create. The Plains people are raiders and take everything but in Xy, they actually create such as swords and cloth. The Plains people take the children away at birth to be raised by those designated to raise the children where in Xy, children are raised by their parents. In the Plains, when one bonded pair dies, the other kills themselves, as custom requires them to follow the other into the “snows”.

Lara and Keir’s love and devotion to each other is used as a teaching tool for Atira who comes to recognize that the bond isn’t just for those who have elevated status nor is it a constraint designed to hem her in. Heath’s character arc is more static as his acceptance of Plains’ culture occurred in previous books.

Problematically, Heath and Atira’s romance was dull for me. I felt that it retread many of the things that I had read in Warprize and Lara and Keir were more dynamic. I found the relationship to be more treacly than agnsty, the emotions of the characters were so obvious and the foreshadowing done with a heavy hand that there seemed to be little for me to do but read the words on the page. It didn’t engage me on any deeper level.

About half way into the story I began to see an overarching series plot that could carry me into further books with the development of Keir’s attempts to reclaim his status as Warlord and my interest began to be engaged again.

I felt that the delay, though, in the publication of the War stories dampened my interest in the series. Whereas once I eagerly looked forward to more War stories, I barely recalled that this one was going to be released. I think I’ll be interested in future stories if we return to Keir and Lara because they are more dynamic and the storyline that is shaping up for the future involves them more directly. Heath and Atira’s story, however, felt thin as if it were a novella that had been expanded into a more full story by including a Warlord/Warprize subplot. C