REVIEW: Until the Dawn by Elizabeth Camden 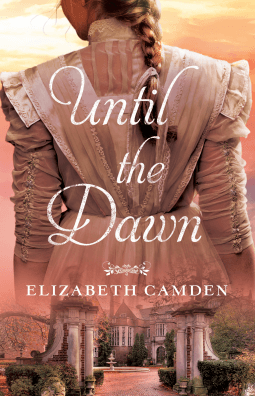 A volunteer for the newly established Weather Bureau, Sophie van Riijn needs access to the highest spot in her village to report the most accurate readings. Fascinated by Dierenpark, an abandoned mansion high atop a windswept cliff in the Hudson River Valley, Sophie knows no better option despite a lack of permission from the absent owners.

The first Vandermark to return to the area in sixty years, Quentin intends to put an end to the shadowy rumors about the property that has brought nothing but trouble upon his family. Ready to tear down the mansion, he is furious to discover a local woman has been trespassing on his land.

Instantly at odds, Quentin and Sophie find common ground when she is the only one who can reach his troubled son. There’s a light within Sophie that Quentin has never known, and a small spark of the hope that left him years ago begins to grow. But when the secrets of Dierenpark and the Vandermark family history are no longer content to stay in the past, will tragedy triumph or can their tenuous hope prevail?

You pick interesting themes and occupations for your characters and even though I’m not a Weather Channel fanatic, I was intrigued by this heroine. We first meet Sophie and learn a little of the Vandermark family’s troubled past in the novella “Toward the Sunrise” but reading that isn’t a prerequisite for this book.

Something mysterious and probably awful happened way in the past – 60 years ago – which is still unsolved. What caused the death of the current head of the family’s father and why does he fill his impressionable great-grandson’s head with tales of horror and doom? Sophie can’t deny that in the hands of talented guides, the Vandermark family woes can add some spice to the day tours which add some much needed money to the local economy but the way that young Pieter is being affected by it tears at her heart.

Sophie has always longed to be a wife, helpmeet and mother – something we’re reminded of at least once per scene in the early pages of the story. But her luck in love has sucked and here she is at the ancient age of 26, unmarried and with little schooling but with a passion for the weather. No, she’s not a Weather Channel devotee but rather is part of the early scientific collection of weather information designed to help with forecasts and predictions in the age before Doppler radar and high flying weather balloons. If the angry and brooding Quentin Vandermark tosses her and her collection equipment out and then demolishes the house from which she’s gathered her data, Sophie doesn’t know what she’ll do.

Quentin has got the dark, brooding persona down pat only with him, it’s not an act. After a horrible accident, he’s endured years of pain and has now been handed an early death sentence by the latest doctor leaving Quentin concerned and anxious about who will raise Pieter and train him to be able to shoulder and handle his vast responsibilities in the family business empire.

Sophie is one part centered young woman, one part happy optimist. The hero and I were both sure at one moment that happy bluebirds were going to fly into the kitchen, wreathe her hair with ribbons and sing a duet with her. Quentin’s sarcastic comments about sugary sweetness are right on the mark. But Sophie’s also got backbone and goes head to head with Quentin about her weather mission – something that grown men fear to do.

So, this book is more focused on religion than the last one, as Sophie is a devout believer – though so far she’s not proselytizing but won’t rule out discussing religion with Pieter. Meanwhile Quentin is a self professed atheist and believer in only what he can see and touch. Blessed are the pure of heart … Quetin thinks this definitely applies to Sophie.

I’m going to have to check into some of these yummy sounding Dutch recipes Sophie makes for the crew at Dierenpark given that they all seem to dissolve into mushy bliss at one mouthful of what she cooks. Seriously, have these people never eaten anything but slop before?

Quentin’s experience when Pieter was born is certainly not period. But his and his family’s history of “melancholia” is. I wondered if depression and mental illness were going to be addressed in story. Oh, dear, no. Quentin mutters about Sophie and her goodness and kindness rescuing him from it. Well, Sophie and her gentle conversion of Quentin to belief must do it because there is no mention of it by the end.

A nice “save the bees” touch is gently layered into the story. Also the brotherhood with the Indian descendants who come seeking to know what the Vandermarks are up to. The “family” dinner isn’t quite Kumbaya though it isn’t too far from it.

There are little things which get ignored for a while until it’s needed to for them to be mentioned. Quentin tossed Emil and his family out which Sophie never thinks of until later when it’s said that whenever she is tempted to think well of Quentin she remembers this. Well, it’s sure never mentioned when she does. Then Quetin is mainly annoyed at Sunny Sophie until scenes when he needs to start showing some better feelings towards her and it’s tucked in that sometimes he thinks she can turn him from melancholia. I never quite bought the progression of the romance which seemed to occur more just when the plot needed it instead of genuinely.

So again with the magic of Sophie’s cooking. Multiple pages are spent on just the pea soup. Then the fact that Sophie’s love of cooking is the magic “thing” that makes her pea soup an explosion of wonderful flavors in Quentin’s mouth. Really?? But once he’s on board to help her get a permanent climate observatory in her town, he’s all over it. He doesn’t view it with amusement or pat her condescendingly on the head about her little project. Instead he delivers concrete advice and helps her ruthlessly hone her proposal. The reality of Sophie’s lack of formal training crashes down once the site is inspected though. She might be dedicated, as Dr. Clark acknowledges, but she isn’t up to what they need to analyze the data instead of merely collecting it. Has Quentin set her hopes up too high? I was disappointed that the whole weather thing ended up fizzling out of the plot.

When Quentin does finally settle down and really has a change of thought about Sophie, it’s fairly believable. His first marriage was a disaster so he’s not necessarily looking for love so much as someone who can interact well with his son. Sophie is his girl! Only she’s got the sense to realize that right now, they’re not marriage material. Still Sophie keeps thinking good thoughts and praying and slowly Quentin is lead, gently, towards faith and belief. He doesn’t get bashed by the God stick but I heard faint traces of a Heavenly chorus singing in jubilation when he finally opened himself to God for good.

The translated page of what is found buried on the property is interesting and lead me to some immediate speculations. My speculations turned out to be wrong but the justice and “God is watching you” wrought by what was done is more old timey “so there, sinner!” instead of New Testament turn the other cheek.

I did like some parts of this story – I must seek out some of these culinary creations Sophie wows the estate guests with – but the weather stuff was a let down, the romance never quite jelled for me and the story is very heavy on religion. It’s great that Quentin finds religion and isn’t the sourpuss he starts as, Pieter seems headed in the right nurtured direction and old wrongs are righted but overall this one gets a C from me.