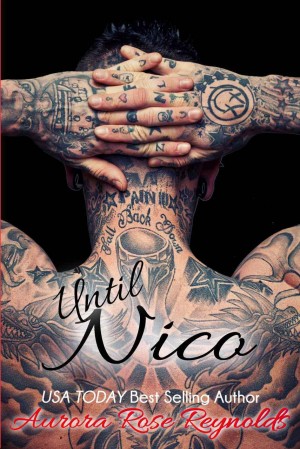 I read the first in this series, Until Trevor, which reminded me a great deal of a Kristen Ashley book. I didn’t follow the other books but upon the recommendation of a friend, I read this one. I definitely think it is the better written of the two and the voice is compelling.

The series is low risk emotionally with little angst and little external conflict. You feel safe when you read the story because it’s mostly about Nico’s courtship of Sophie. He falls in love with her instantly and spends the whole book convincing her that he’s a vital and necessary part of her life.

The entire series follows one primary conceit. The Mayson males are cursed to fall in love with one woman on sight. When Nico Mayson finds a cell phone, he also finds the love of his life in Sophie Grates. Except she doesn’t know it and she’s not prepared for it or him.

Upon meeting Sophie, Nico’s primary objective is to get her to return his feelings. The best thing about the Until series is that the heroes are incredibly sweet even though they are domineering. What I left the story with, though, was an insidious feeling of misogyny the colored my enjoyment of the book.

Sophie is a librarian who suffered a non penetrative sexual assault when she was a tween. This has left her traumatized but she does seek counseling for it. But her experience with men in the past hasn’t been positive so she’s kept to herself. But through Nico’s bull dogged persistence, Sophie soon finds herself dating Nico.

Nico senses that Sophie isn’t ready to take the next step in the relationship (and in the early stages of the book, Sophie isn’t even willing to acknowledge that there is a relationship which provides some comedic relief) and the physical part of the story develops at a slow-ish pace. The two sleep together but don’t have sex, for instance, in one of the more tender parts of the book.

Until Nico is a perfect book to read when you want to turn off your brain and just enjoy a sweet romance with a gruff alpha male who is avidly pursuing the sweet, innocent heroine.  There is a little suspense plot thrown in so that Nico has the opportunity to rescue Sophie. And there are definitely some funny moments as Nico expresses his possessiveness over Sophie and ultimately their kids.

However…Nico had a tendency to say and think things that suggested women were definitely the weaker sex. It really grated on me after a while and the capper was the epilogue where he not only admitted to his bigotry but embraced it.

Chicks are all the fucking same. They all talk about how men only want one thing from them, but they are constantly throwing themselves at me, yet I never hit on them first. They want the bad-boy experience.

Later his mother calls him a man-whore so he’s judging women for doing the same exact thing that he’s doing.

“Hopefully, now that you’re here, they will stop arguing like a bunch of old ladies and just get it done already.”

Why couldn’t he accused them of being “old men”?

Second, I know you bitches love to sit around and gossip like a bunch of women in a knitting club, but unlike you fuckers, my business is my business.”

Again why use “women” in a perjorative sense here? It’s his brothers that he’s referring to as gossiping.

“So your daughters can’t talk to boys, but your son can do that?” She nods to where my seventeen-year-old son, Bax, has his mouth on some girl.

“I never claimed to be fair, babe, but the shit with your daughters is getting ridiculous.”

There is nothing greater than being a father, but it’s also difficult watching your kids grow up. Having girls only makes it that much harder. Boys can look out for themselves, but girls need someone there to watch out for them.

I think anyone who read the book would argue that Nico loved women but you can love women and still think that they aren’t equals.  There’s a reference Nico makes to “good girls” and treasuring Sophie’s innocence and that type of language plays into the commodization of a woman’s sexuality. She’s good if she’s innocent and not flirtatious but bad if she is sticking her tongue down a guy’s throat.

Nico’s jocular words aren’t the only signs of his belief that males are the superior sex. Throughout the story he’s preemptively addressing issues that Sophie isn’t ready to deal with for her sake. For instance, when she refuses to tell him about her past he gets a deep background check on her and then confronts her with the information so she can move past it. At this point, it’s important to remember that Sophie is in therapy for the abortive sexual assault but Nico wants to have sex with her. She won’t be ready until she can talk and deal about her past. So while this seems caring on the surface, his motivation is dick driven.

I don’t remember Until Trevor having this underlying theme and I know that I’ve been guilty of using gendered insults. But as I grow older or as my daughter grows older (or a confluence of the two) I’m becoming increasingly intolerant of using “girls” or “women” as the worst thing that someone can be called. You throw like a girl; you gossip like a woman; you do all these perjorative things because you have lady bits.

The messaging in the book is likely unintentional but it was so pervasive, I didn’t feel like I could escape it. While I enjoyed the story, I had a hard time warming up to Nico. If Sophie hadn’t been an innocent and she’d played the field like he did, would he find her just as amazing? I don’t think so and that left a sour taste in my mouth at the end. C