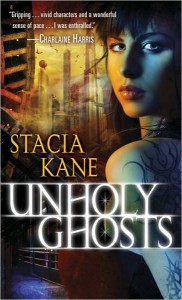 I am not a big horror fan. I don’t find movies like Paranormal Activity, Resident Evil or 28 Days Later enjoyable. And for clarifcation purposes, I love Blade Runner, 12 Monkeys and Serenity. I nearly got thrown out of business class once when I kept yelping aloud during Signs and I was specifically asked by the hubby to not watch Constantine on a flight. I read a book instead. Yes, dystopian urban fantasy appeals, but with a true horror, scare the living daylights out of you element, not so much. Admittedly, a book with a title like Unholy Ghosts might not be the first thing I’d pick up of my own volition.

The post-apocalyptic world of Unholy Ghosts takes place in Triumph City and is based around the Church of the Real Truth, not so much a church as replacement for the fallen government and a police force out to control the dead. In the world of Chess Putnam, there is no G-d, no demons, no faith, only Fact.

“Now the lack of gods is fact, which is Truth and need not be believed or doubted. The Church offers proctection, and so the Church makes law.”
–The Book of Truth, Origins, Article 1641

The living must defend themselves against ghosts and the dead, and the Church takes care of, and reimburses citizens (to the tune of $50,000) that are harassed by the deceased. Chess is a Churchwitch, she’s covered in special Church-sanctioned tattoos and has a strong ability and affinity for hunting and Banishing ghosts and exposing families that try to fake a haunting. This is where my love for Chess Putnam ends, because Chess is a drug addict. I have a serious problem with a protagonist that is a drug addict. I don’t give a shit how magically gifted she is, how awesome she is without being MarySuetastic. If Chess wasn’t such an addicted fuckup I think I could really enjoy the superior worldbuilding, as gritty and ugly as it is, and possibly even enjoy being slightly scared outta my pants at times. I love a good post-apocalyptic urban fantasy, but to have the heroine portrayed as a drug addict makes it a tough pill to swallow. Har-de-har.

Back to the plot: Chess is in deep to Bump, a drug lord who decides that he wants to start using an old abandoned airport to start importing his drugs faster. Problem: the airport seems to have a ghost issue. Solution: artificially inflate the amount of dough Chess owes, and strong arm her into Banishing the ghosts at the airport. While this could be perceived as a cautionary-type tale of a woman who gets into major trouble because of her habits, I don’t buy it. Chess is doing drugs, needing drugs and lamenting about not having the right drugs throughout the book. Oops, I was talking about the plot, right? Chess goes out to the airport with Terrible, Bump’s enforcer, and they discover that a lot of bad shit has been going on at the airport. Meaning human sacrifice and dark magic in an attempt to raise a particular dead creature, which is very illegal and extremely dangerous. Chess discovers an amulet on a body that is humming with black magic, indecipherable runes, and nearly burns her hand off. She takes the amulet with her to figure out later…which you know isn’t good. If I were in a movie theater I’d be yelling at the screen.

Chess’ troubles multiply as word gets around that Bump wants to open the airport. Bump’s main rival, Slobag, decides to make sure Chess doesn’t get the airport into working order by sending his enforcer, Lex, to meet with Chess. Chess seems to have the hots for both Lex and Terrible, which makes things slightly confusing for her with the drug-induced haze and her inability to separate her emotions from her highs and lows. On top of all of this, there is a group that is totally into dark magic, totally strong and totally against the Church, and they may be behind the insanity at the airport.

The pacing of the book is excellent, and definitely gave me some of those “put-the-book-down-before-my-heart-explodes” moments. The characters are vivid and even the secondary characters get fabulous treatment. I can’t say enough about the wonderful worldbuilding. Triumph City and The Church of the Real Truth are tangible and downright scary, gritty and dark. With all of that, I can’t get past Chess and the drugs. It makes her intimate interactions with Terrible and Lex feel phony, and this is exemplified in an encounter in the book. Chess meets with Terrible and she’s so high that she nearly falls into bed with him (or rather, into a back room at a bar), but instead manages to verbally destroy him. In the end, she’s unrepentant about any and all of this, and as much as I like all of the other aspects of the book, I think I might hate her. C