I love all things supernatural. Fitting, I suppose, given the season. That’s why demon hunting ranks high among my my favorite fictional occupations. I like seeing what they can do, the types of monsters they face (bonus points if they’re non-western!), and how their job affects their lives. So when I heard that your debut solo effort featured a team of demon hunters, I snatched it right up. 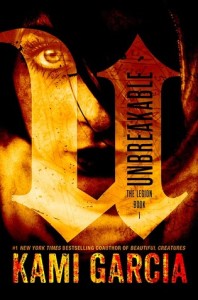 Unbreakable wastes no time kicking the story into gear. We first meet Kennedy as she’s out looking for her cat one night. Her search brings her to a cemetery where she not only finds her cat but also encounters a ghost. This meeting proves to have terrible consequences because without Kennedy realizing it, the ghost possesses her cat and hitches a ride to her house where it then proceeds to kill her mother.

Kennedy would have shared a similar fate but a pair of hot twins, Jared and Lukas, save her in time. Devastated by her mother’s death, she soon discovers that a normal life is no longer possible for her. She’s the descendant of a demon hunter who belonged to a five-member society charged with keeping a powerful demon in check and that demon is now doing everything in its power to break free.

Kennedy is exactly the type of protagonist you’d expect in this type of story. She had a normal life and loving relationship with her mother. Given that the relationship was a good one, the mother’s ultimate fate is hardly shocking. Poor mothers. They always die! Kept in the dark about her heritage, Kennedy has no idea how to hunt or fight demons. She’s had no training or special abilities. Her only skill is an eidetic memory, which of course comes into use. While much of the story is about seeking out the pieces to stop the demon’s escape, it’s also just as much about Kennedy learning about the Legion and their mission.

The plot proceeds fast and furious. It wastes no time and there is no fluff. Once Kennedy is swept up into the world of the Legion, it’s a race against time to stop the demon. While I liked that the plot was relentless, I wished the plot-to-characterization ratio was more balanced. As it was, I found the characters a tad superficial and this detracted from the story. If the characters had been better developed overall, I think some of the dramatic reveals (like Jared’s big secret) would have had more impact.

Speaking of Jared, I thought the romance between Kennedy and him was phoned in. It went through the motions of the typical instalove formula so prevalent in YA but as usual, I never quite understood why they were Meant to Be. Why did Jared like Kennedy? Why did Kennedy prefer Jared over his twin? They both saved her.

In addition, there’s a poorly developed love triangle involving Kennedy, Jared and Lukas. Poorly developed, because it never got off the ground. Both twins are attracted to Kennedy but while Jared is standoffish due to guilt over past actions, Lukas is more demonstrative and friendly. Wouldn’t it make more sense for Kennedy to like Lukas then? But Kennedy only ever truly thinks of Jared. When it comes to Lukas, it’s apparent she only thinks of him as a friend. I understand love triangles involving siblings can be tricky but they require intensity and conflict to make them work. While Lukas and Jared had their issues with each other, that emotion never came through because the characterization left much to be desired. Even if the intention wasn’t to have a love triangle — and I can see an argument for that — the underlying conflict between the brothers should have affected the burgeoning relationship between Kennedy and Jared.

I did like the supporting characters, Alara and Priest. True, they suffered from poorly executed characterization but the idea of them was great. I adored that Alara was fiercely competent and that her relationship with Kennedy starts off on the wrong foot. But in her eyes, the inexperienced Kennedy is a liability and someone who could get them all killed. If I were in Alara’s place, I’d feel the same way. But that’s what makes the evolution of their relationship so great. Kennedy has to work to gain Alara’s trust and respect. It doesn’t just fall into her lap.

While I won’t say the ending revelation was a surprise, I thought the execution was excellent. It was a brutal twist and delivered a gut punch. For what was an otherwise so-so read, the ending is something that makes me contemplate picking up the sequel. At the very least, I’d like to find out the truth about the Legion, the demon it was charged to watch over, and how exactly Kennedy and late mother figured in all of it.

Unbreakable is a worthwhile read for people who love demon hunters and want an action-packed plot. Readers who want deeper characterization and angst, however, should probably look elsewhere. I just wish the rest of the book lived up to the ending. C