I think I received this book in paper format, but I actually bought the digital copy when it was released on Tuesday because that is my preferred way of reading. I bought the book for three reasons. First, I had read the first one and it ended in somewhat of a cliffhanger and I was told by another reader that this provides some closure. Second, we have had a paucity of PNR reviews here at Dear Author. Third, I’ve had some complaints that I haven’t been reviewing enough mainstream books. 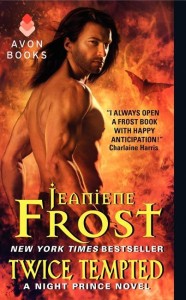 I haven’t kept up with the Cat and Bones series but apparently Vlad was introduced in those books. He’s a powerful and old vampire who has taken a human for a lover. Leila was once able to read people and link to them through objects but in the last book, Vlad had essentially fireproofed her and the end result was that she no longer had the psychic power.

Leila begins Twice Tempted more in love with Vlad than ever but she’s insecure about her place in his life. Leila wonders if he simply wanted her because of the power her abilities brought to him. The two suffer a falling out and Leila runs off to her old carnival pal, Marty. Unfortunately, once there, Leila is the subject of multiple assassination attempts. Her abilities and her bodyguard keep her alive but she wonders if Vlad is behind the attacks.

Ultimately, because this is a romance, Vlad and Leila are brought back together and they must learn to negotiate the new feelings and power balance.

Leila, for all her power, comes off as a little pretty princess for me. She spends a lot of time agonizing over the feelings that she has for Vlad and the lack of feelings she perceives he has for her. She does try to move on with her life, but I was a bit confused as to why she would think Vlad would be out to kill her and why she would think he would fail so miserably at the multiple attempts.

The suspense element depended primarily on Leila’s psychic hunting powers rather than any other kind of detective work. Even Vlad’s torturing never gained much traction. Probably the least successful for me were whe “scenes” Leila views psychically when she touches an object. Some are her in a omniscient point of view and some were more like diary entries of the people she was spying on. The lack of consistency and more formalistic tone was jarring.

Here is an example of a psychic vision. This time, she’s narrating it for us.

Adrian minimized the screen before he opened the door. The woman walked in, wearing dark glasses and a scarf around her head. To make matters worse, what I could see of her face seemed blurry. What a time for my psychic vision to need a tune-up.

Later, the person she is spying on narrates it:

I was Vladislav Basarab Dracul, bartered by my father into hellish political imprisonment as a boy, then as a young man, fighting war after war to keep my country free, only to be betrayed by my nobles, the church, and even my own brother.

I felt the psychic scenes needed to be consistently framed, either she narrates them or the individual she is spying on narrates them. Further, I wish that there had been more internal debate about an offer to be turned. Leila lived years with the vampire, Marty, and never once agreed to be turned. Did she want to remain human? Did she long to be a vampire? I didn’t really know and that was an important issue in the book that didn’t receive enough attention.

The pace of the story moved quickly and while I wasn’t fully on board with all the decisions Leila made, the story was entertaining enough. I’m not sure I’d buy a third volume in this series but I was entertained. C