REVIEW: Trouble at the Wedding by Laura Lee Guhrke

In a way I wish I had read Trouble at the Wedding before the first two books in the Abandoned at the Altar series. The Edwardian setting, pairing of the bourgeois heroine from the American South and the titled but impoverished English duke, and mixed cocktail of the marriage for money and the reformed rake plots add up to an ambitious vision. But I’m not sure whether my expectations were set higher after the first two books, or if what struck me as fresh earlier now seems a bit worn, but whatever the reason, I found this third installment to be a bit of a kitchen sink of tropes and clichés, more interesting and successful in the concept than the execution. 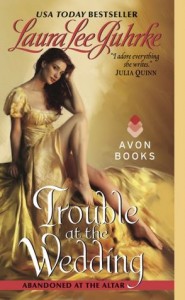 Annabel Wheaton may have catapulted from near poverty to great wealth, and from Gooseneck Bend, Mississippi to New York City, following the death of her father, but she still feels like the “poor white trash” she’s been called most of her life. A smart, independent, business-minded young woman who has already been burned by what she thought was true love, Annabel is determined to marry into the British aristocracy, trading her money for a respected title and a sedate and secure life overseeing her husband’s English estate and raising their children. The man she has chosen, Bernard Alistair, Earl of Rumsford, is not particularly exciting, but then that’s the point. Annabel has had her fill of exciting men, and she frankly doesn’t trust them. Instead, she’s looking forward to a life of security, which she is certain will more than compensate for a lack of passionate romantic love.

Not everyone is on board with Annabel and Bernard’s upcoming wedding, however, which is set for six short days away on the ocean liner Atlantic, a compromise solution to the problem of whether to hold the ceremony in New York or London. One of the dissenters is one of Annabel’s trustees, her uncle Arthur, who believes that Annabel deserves a better match and is determined to get Annabel to see how ill-advised her choice of husband is. Which brings Christian Du Quesne, the handsome, rakish, and nearly broke Duke of Scarborough into the mix, hired by Arthur to talk Annabel out of the wedding in exchange for a half a million American dollars, a sum that will substantially rehabilitate the family estate, which fell into deep debt under the control of his older brother Andrew, whose death has brought the ignominious and unenthusiastic second son into the title.

Christian does not have to stretch the truth in articulating his disdainful view of life in England, especially for the dissolute aristocracy, and once he makes the acquaintance of the lushly beautiful Annabel, his attraction to her, combined with his dislike of Rumsford, generates an urgent personal interest for Christian in convincing Annabel that she doesn’t want what she thinks she wants. Annabel, who is well aware of her tendency to fall for the bad boy, doesn’t want to believe the things Christian is telling her about the unsuitability of life as an English countess, and especially as the Countess of Rumsford, but because Christian promises her he will tell her all the unwritten rules of the life she is choosing, she cannot stay away from him long enough to remain immune to either his charms or his admonitions.

As is the case in many Romances featuring two outsiders, Christian and Annabel have a rapport that is evident to both of them, despite their mutual insistence that they would never suit as a couple. Still, that rapport creates a kind of fast friendship, which tolerates a great deal of mutual honesty and fosters a powerful mutual attraction. Christian tells Annabel of his own past, married to a young heiress who killed herself after miscarrying their baby, while Christian was traveling and partying with friends. Annabel tells Christian of her own humiliation at the hands of the town rich boy, who took Annabel’s virginity and then unceremoniously dumped her.  Which makes Annabel even more determined to go through with the wedding and take the life she wants, and even as Christian admits defeat and drinks himself into a stupor, he inexplicably finds himself standing up at the wedding and calling it a “farce and a lie,” humiliating Annabel a second, devastating time and necessitating, in Christian’s mind, a proposal to save Annabel’s reputation.

But Annabel isn’t going to meekly accept Christian’s loveless sacrifice, and instead she engineers a strategy by which Christian will retroactively become one of Annabel’s trustees, thus making his wedding protest one of avuncular protection rather than scandalous insinuation. And in the meantime, Christian’s sister Sylvia volunteers to bring Annabel more fully into London society, where she can make an appropriate match and ultimately resuscitate her original ambition.

In many Romances, all of this set-up would have occurred in the first quarter or third of the novel, with the remainder of the story dedicated to unraveling Annabel and Christian’s true feelings for each other. Actually, many novels would likely turn the plot into one of marriage of convenience between the protagonists. That this particular plot occurs at the halfway point of the novel is indicative of its ambition, as does Annabel’s incredibly independent focus and resolve:

“First of all, let me say I owe you my most sincere apologies. My conduct was reprehensible”

“Which part?” she asked in a tart voice. “The part where you agreed to take money for talking me out of marrying Bernard? Or –“

“You know about that?”

“Uncle Arthur told me. Needless to say, he’s not feeling inclined to pay you that money now, so is that what you’re apologizing for? Hoping he’ll give it to you anyway? Or maybe it’s breaking up my wedding that you’re sorry about? Or maybe it’s because you called it a farce and a lie, and hurt my reputation? Or maybe it was the fact that you hauled off and kissed me last night? Which of those reprehensible things is the one you’re apologizing for?”

“We should become engaged.”

“Thank you for your gallant effort to save the day,” and the sweet drawling sarcasm in her voice told him his hope of an easy solution was rather out the window. “I appreciate it so very much, Your Grace. But I think I’ll pass.”

“You’re saying no?” He supposed he shouldn’t be surprised. No doubt she felt a bit let down by the idea, for he knew he hadn’t made any effort to put a romantic gloss on it. Nonetheless, she couldn’t really refuse. “But we have to become engaged. It’s the only way to avert a scandal.”

“It’s not the only way. It’s the simplest way, and the easiest way for you because it doesn’t affect your life at all.”

I really liked this Annabel. I was even willing to overlook the sitcom sorghum character of her Southern accent and idioms, as well as the cliché-ridden prose and conversation. I liked the fact that the book took a somewhat unexpected turn at this point and that Annabel seemed to be the engineer of her own rescue.

Then it all fell apart for me. Annabel and Christian find themselves in that push-pull of attraction and resistance, with Annabel literally begging Christian to stay away and then feeling disappointed when he complies. Christian is torn between doing “the right thing” and pursuing his own desires, even as he knows he doesn’t want another marriage to a woman who supposedly deserves better than a rake like him. Rinse and repeat.

I have recently been thinking about certain Romance character pairings where you have an almost unresolveable conflict. For example, a heroine who deserves to be loved for who she is and a hero who is destined to let any woman who loves him down. As often as we see these kinds of conflicts, I’m not sure they’re usually resolved by means that don’t seem almost supernatural, often in the form of a crisis that clues the hero in to how much he loves the heroine and wants to be the man she deserves. I have, of late, been pining for more realistic resolutions to these complex conflicts, and one of the things that frustrated me about Trouble at the Wedding was the way in which the dramatic tension in the second half of the novel is generated in part by Annabel’s increasing desolation over the depth of her feelings for Christian and his inability to love her in return.

Not only does this dynamic weaken Annabel’s character and undermine her independent resolve, it accomplishes this by manipulating the reader into desperately hoping that Christian will come to his senses and accept his own feelings are more than simple lust. It became a problematic dynamic for me in this novel because I kept feeling like I was put in a position where I had to depend on Christian for Annabel’s happy ending, which contravened so much of what appealed to me about her character. While that is typical Romance form, it was constructed at the expensive of a character who, for me, at least, was appealing to Christian for that precise independence that the romantic trajectory of the novel undermined.

Part of the issue may have been the relatively short time and page frame in which the second half of the novel proceeds. But I also think there was a difficult pairing of plot and character ambition and genre mimesis that went too far out of balance in the second half of the book. I also felt that there was more infodump in this novel than in the previous two, with passages that sounded almost like they were powered by cinematic adaptations of Edith Wharton novels or Wikipedia:

The door banged again and the young woman below looked back over her shoulder. “There you are at last!” she exclaimed as a girl about ten years old came into view, her age evidenced not only by her more diminutive stature, but also by the shorter length of her skirt, the sailor motif of her dress, and the fact that her dark hair was not put up.

As much as I appreciated the details provided, their integration didn’t feel as easy as in previous novels set during this same time, and that added to the kitchen sink feel of the novel for me. Still, had Annabel’s happiness not depended so very much on Christian’s change, I think I would have overlooked so much else in the novel. But that substantial disappointment made other elements seem more pronounced, undermining my appreciation and enjoyment of the more unexpected and ambitious elements of the novel. C