REVIEW: Too Hot to Handle by Victoria Dahl

Merry Kade has always been the good girl. The best friend. The one who patiently waits for the guy to notice her. Well, no more. Merry has just scored her dream job, and it’s time for her life to change. As the new curator of a museum in Wyoming, she’ll supervise a lot of restoration work. Luckily she’s found the perfect contractor for the job.

Shane Harcourt can’t believe that someone wants to turn a beat-up ghost town into a museum attraction. After all, the last thing he needs is the site of his dream ranch turning into a tourist trap. He’ll work on the project, if only to hasten its failure…until the beautiful, quirky woman in charge starts to change his mind.

For the first time ever, Merry has a gorgeous stud hot on her heels. But can she trust this strong, silent man, even if he is a force of nature in bed? When Shane’s ulterior motives come out, he’ll need to prove to Merry that a love like theirs may be too hot to handle, but it’s impossible to resist.

I thought it time to try one of your books since so many of my fellow reviewers adore your work and Jane had sent me this arc. While the story is competent and the dialogue is good to very good – especially the guys – I finished it with a “that was okay but not great” feeling. Or should I say the scenarios were good when I first read most of them years ago but I’ve read similar versions of this book far too many times to feel it was much beyond checking off the boxes. 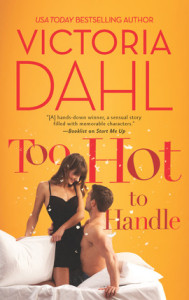 Merry, bless her heart, is the type of eager to please yet unsure of herself puppy dog heroine who ends up annoying me because she’s so sad sack and down on herself. Then I get upset at myself for not loving this sweet little heroine who only asks to be loved, though she doesn’t believe she’ll ever get that from a man, and who tries so darn hard to be upbeat about it anyway. She has no self confidence, which she tries to mask by almost hyper enthusiasm, and continues to almost the end of the book almost cringing about how she’s not really good enough for her job. When she told the board members that if they fired her she’d stay on as interim manager until they found someone else I wanted to yell through the pages “Merry, grow a pair!” I found little to get me involved or caring in this aspect of the book and merely looked forward to the end of these scenes.

Shane is a wounded man who was left scarred by his father’s abandonment which of course means he’ll never be able to settle down or offer a woman anything other than some short-term hot sex. He’s also never truly felt connected to the area because he’s rejected it due to the fact that his father left the family and his grandfather was a controlling dick. By the third or fourth time I’d read another variation of his thoughts, my eyes ached from rolling. Poor, sad, pitiful Shane. True he stood up to his grandfather’s humiliating demand that Shane change his last name back to Bishop in order to get all the family money and he’s going to contest the will that instead handed the money over to the Board but Shane enjoys being the victim so much it was hard to swallow his last minute change despite the two events which precipitated it.

Merry and Shane’s relationship is one I’ve read a hundred times or more. “He’s so hot and I’m just the not hot girl next door type who’s never attracted men.” Never mind that Shane’s been looking her up and down and showing his interest in sex. No, Babble Mouth Merry has to go and spout things to Shane which embarrass her such as how she hasn’t had sex in 2 years. As her verbal humiliation dragged on my next mental comment was “if you’re already in a hole, stop digging.” Blessedly she eventually did but not until after the standard they’re-in-a-crowded-place-and-must-yell-over-the-noise scene when Merry screams to a friend that “SHE JUST WANTS TO GET LAID!” right, of course, when the music dies down and everyone within 10 feet hears her. The sex, when it happens, is hot and it’s obvious that Shane wants it to continue but of course Merry has to think otherwise because, well see the above paragraph.

I could peg exactly when Merry begins to feel at home with the people in the town although she’s never felt this connect to anywhere or anyone before. Ditto with Shane’s change of feelings about the ghost town his grandfather left all the family money to in order to restore it and turn it into a tourist attraction. The show down from the initial set up of Merry and Shane’s conflict came right on schedule though I was pleased at how Merry finally stood up for herself and verbally let Shane have it right in the kisser. Which of course was the “light bulb” moment for Shane when he realized how much she meant to him and cued his Big Gesture We All Saw Coming.

The dialog – especially between the men – is good and crudely realistic. I like how Merry and her best friend Grace stick up for each other – especially in the face of Merry’s bitchy cousin. The sex is hot and I was mildly happy to see the HEA but honestly by the final third of the book, I was in skim mode because I’ve read it all before and though it’s competently done, there’s nothing new here at all. C