Thoughtless is the perfect title for this book because all of the main characters act in thoughtless ways.  But because the story is told in the first person from Kiera’s point of view, her behavior is what I focused on.  My first reaction on completing this book was hell no and then when I sat down to write the review, I wondered if I could be more nuanced than “I hate the heroine”. This is my attempt. 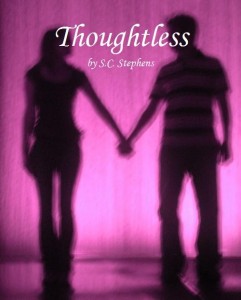 Kiera moved to Seattle to be with her long time boyfriend, Denny. He asks her to do this, taking her away from family and friends and her initial college choice. She loves him and wants to be with him. But she moves in with him while he is living with a friend, Kellan Kyle, kind of a wealthy dilettante in a local band. Kellan is gorgeous and sexy and charismatic. Kellan and Kiera begin to meet in the morning in the kitchen and drink coffee together. Their encounters are charged with sexual tension early on but Kiera remains blind to it.

Denny takes an internship in Phoenix and leaves her there with Kellan which was his first mistake. While Kiera tries to resist Kellan, their interactions become more and more intimate emotionally and the sexual tension ratchets up.  Denny then makes a life decision without Kiera. He is going to take his dream job in Phoenix. He assures Kiera that she’ll love it. That night she gives in to feelings for Kellan and they have sex. The next moment she finds Denny back in Seattle telling her he has quit his job and is back with her. He can’t live without her.

Kiera’s torn. She loves Denny. He’s safe for her. But she wants Kellan badly and Kellan wants her too. Whether it is to punish Kiera, himself or simply to seek succor, Kellan begins sleeping around, bringing multiple women back to his room.

My biggest problem with Kiera is that she allows the situation to fester for too long. I did understand that she wanted to be with Denny because he was safe but that Kellan was so magnetic that she couldn’t stay away. Unfortunately it takes her a whole book for the situation to shake out and she is never proactive. I wanted Kiera to take some responsiblity for her actions. Even though Denny left her and then came back to her and even though Kellan had also little respect for Denny’s feelings, I still wanted Kiera to woman up. And she never did, not through the entire book.  Not only that but she asked, repeatedly, for friends of hers and Denny’s to lie for her and to assist in the cover up.

The book is full of angst.  How could it not be with the three people involved in a torrid love triangle?  Kiera has nightmares of slipping into bed with Kellan only to have Denny find them together.  She is sick when she sees Kellan with other women.  She is tortured by Denny’s sweetness and kindness.  Every day that goes by hurts everyone even more, Kellan and Kiera now but Denny when he finds out, as he will inevitably.  I wanted to empathize with Kiera but because she seemed so reactive, it was hard to root for her. Instead her continued avoidance of making a choice, deceiving Denny and fostering Kellan’s belief that they had a future together only frustrated me.  Her passivity angered me.  Yet, I read the entire book and the second.  I bought these books when they were self published and before they were purchased by a larger publisher. It’s not likely I would have bought the books at the current price but oddly I don’t regret reading this book or its sequel.  Such is the power of a strong emotional story, even one wherein I didn’t like the characters for most of the book.  C

→ Jane
Previous article: REVIEW: For Me and My Gal by Robbi McCoy
Next Post: Daily Deals: Contemporary romance, classic fantasy, and a moving memoir