REVIEW: There You Stand by Christina Lee 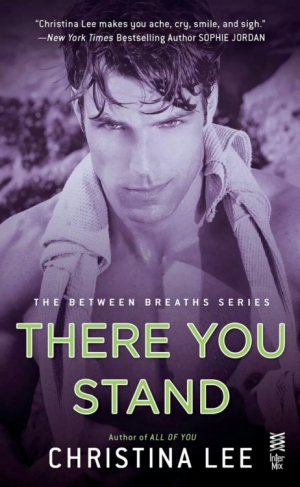 I’ve read the previous books in your new adult series. Some I like more than others but overall, I have a favorable opinion of them. Your latest, There You Stand, continues the series with an M/M romance. (I guess gay romance is a thing now in new adult? Are we going to have some F/F NA romance to balance things out, too?)

Cory Easton is a tattoo artist who works at the same shop as Bennett and Jessie. Even though he’s certainly not a monk, he’s still nursing a broken heart over the death of his boyfriend three years ago. But the random hook-ups and one night stands are getting old, and Cory finds himself wanting something more.

That more takes the form of Jude York. Jude’s the new guy in town — a skateboarder with a mysterious past and who may have ties to the local motorcycle club. Cory knows better than to get involved with someone who can’t be 100% honest with him, but he just can’t seem to stay away from Jude.

I really liked Cory. He’s just a regular guy, trying to live his life. He hasn’t quite gotten over his boyfriend’s death, but the circumstances were traumatic. It makes sense that he hasn’t been able to move on, even though he’s attempted a relationship or two in the time since. I also thought it was wonderful that he had a great relationship with his grandmother. I never get tired of seeing depictions of multigenerational family members taking care of each other. It’s nice.

I admit I had a harder time with Jude. It wasn’t that he was reticent and aloof. Novels are littered with those sorts of characters. It’s that I associate skateboarding with teenagers, so it was hard for me to picture Jude as a man in his mid-twenties. I kept reading him as younger. I know that’s not fair. There are plenty of grown men who are professional skateboarders.

This leads to my main reservation with the book. Because of Jude’s reticence, I had a hard time buying into their romance. The use of Cory’s dog to keep forcing the two into each other’s company started ringing false to me. You can only rely on a device so many times before it starts ringing false. I understand there were reasons for Jude’s attempts to stay away from Cory, but for a good portion of the book, Cory thought Jude was straight. I was leery every time the narrative brought this up. I really dislike the gay for you trope and there were moments where I thought this was going to be the case.

I’m not sure how I feel about the reasons behind Jude trying to keep Cory at arm’s length. They made sense, but the execution made it feel like they belonged in another book. A romantic suspense novel, to be precise. The addition of a motorcycle club further muddled the waters for me. Those guys weren’t the main characters, but their presence increases in the second half of the book and that made the story harder to pin down. I guess I’ve always had particular idea of what motorcycle books are in my head and to see some of those elements come into your college-set contemporary NA series was very jarring.

This might be a reader failure, a misplace expectation, I’m not sure. It seemed like there were three different books here: one about a guy moving on after a loss, one about a guy on the run from his past, and one about a motorcycle club’s exploits. I’m all for blending elements from different subgenres, but they didn’t come together into a seamless whole for me.

I wish I liked this book more than I did. I’m still on the Christina Lee bus but I’m a little unsure about the direction the series is taking. C