REVIEW: The You Know Who Girls: Freshman Year by Annameekee Hesik

“Abbey Brooks, Gila High freshman-to-be, never thought a hellish day of shopping at the mall with her best friend, Kate, could change her life. But when she orders French fries from the flirtatious Hot Dog on a Stick Chick, she gets more than deep-fried potatoes. Abbey tries to ignore the weird, happy feeling in her gut, but that proves to be as impossible as avoiding the very insistent (and—rumor has it—very lesbian) players on Gila High’s girls’ basketball team. They want freakishly long-legged Abbey to try out, and Abbey doesn’t hate the idea. But Kate made Abbey pinky swear to avoid basketball and to keep away from the you-know-who girls on the team.

Sometimes promises can’t be kept. And sometimes girls in uniform are impossible to resist.”

I like to broaden my reading horizons and have had some good luck trying Young Adult and LGBT books which is what made me want to read “The You Who Know Girls: Freshman Year” from Bold Stroke Books. To be honest, at the halfway mark, I debated whether or not I wanted to keep reading. The subject matter, a teenager beginning her freshman year and discovering and exploring her sexuality, was interesting but the teenager – or rather her obsession with herself and her habit of lying – grew tiresome. 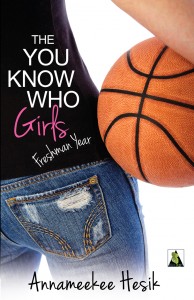 The first third of the book took me back a few years. Abbey and her friends, including best friend Kate, are about to begin high school with all its excitement and pitfalls. As freshmen, they’re on the bottom rung of the social hierarchy but at the same time, they’re in high school now! Abbey might not be as focused on fashion as Kate is but she wants to fit in and find her place. Kate is changing the rules though and making Abbey and the others agree to ditch their studying ways. Abbey’s okay with this but finds it hard to keep to the promise to avoid basketball and the rumored lesbians on the team. She discovers a love of the game and being with these girls who accept her just as she is without trying to change or manage her. I think you captured the excitement and the nervousness of her first days in this new environment which is not surprising since you’re a high school teacher.

Pretty soon, though, a habit of Abbey’s starts to annoy me and it kept annoying me until the end of the book. Abbey lies. She lies to herself, she lies to her mom, to her best friend, to her other friends, to a potential girlfriend, to a guy who asked her out, and to her teachers. She lies to just about everyone. What start out as innocent, little white lies soon balloon into whoppers that get so convoluted that I find it hard to believe she doesn’t trip over them while trying to keep them all straight in her head. She only ever directly apologizes to her BFF and, in a sideways manner, to a teammate and then only when she finally get caught out. Aside from that, she’s a liar and a whiny one at that. I only hope when her mother eventually discovers all this, it won’t hurt her too much.

I know this is a major turning point in her life – she’s growing up, starting high school and – most importantly – discovering her sexuality and preferences but there is some intense navel gazing going on here. Fourteen year olds are just getting to that “OMG! everything that happens to me is SO important and earth SHATTERINGLY riveting” so I get that Abbey is obsessed with herself and feels the entire world is too. But regardless of it this is normal teenage behavior, I didn’t find myself as interested in her as she is. She’s smart, she can play basketball, she’s somewhat attractive but aside from that I didn’t get what caused Keeta – a sought after senior with a string of past and wannabe girlfriends – and Mia to keep pursuing Abbey.

This isn’t a totally gay friendly world, as evidenced by one short scene of Abbey and Keeta being harassed in public, and Abbey does worry about how the important people in her life will react to her revelation. Still when it comes right down to it, there isn’t much of this actually covered in the book. Kate the BFF finds out and it does affect their relationship for a few weeks. But most of the rest of the people “in the know” are lesbians and okay with it. Abbey does get invited out by one guy and this is used as a way for her to wonder – a little bit – about whether she’s really lesbian or maybe bisexual but then after a short amount of reflection, she realizes she isn’t interested in him romantically and he then drops off the face of the planet. I hoped that we’d get a bit of his viewpoint to her coming out – or actually her quiet slipping out – of the closet but no, nothing. It’s like he completely ceases to exist. Or what about the rest of Abbey’s former group of friends? Not much from them either. And nothing from Abbey’s mother who – I think – might guess Abbey’s secret but – maybe not – as nothing is ever said to her!

I think the book is technically well written and probably accurately shows the fact that teenagers think the least little thing that takes place in their life is of center stage importance. But honestly by the time I finished it, I had had enough of Abbey. Beyond the fact that she’ discovering herself as a lesbian, she’s just not that interesting. The LGBT hook is what will probably keep people reading the story. It had a lot of potential but fails to really take advantage of much of it and ultimately ends up being an okay book at best for me. C