REVIEW: The Trouble with Being Wicked by Emma Locke

I’ve been in something of an extended slump with historical romances this year – none have earned better than a B grade from me, and nothing has really held my attention and impressed me as new or fresh. I decided to branch out to new-to-me authors, but unfortunately did not find what I was looking for in The Trouble with Being Wicked. 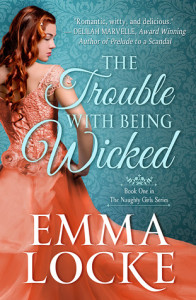 Celeste Gray arrives at the ramshackle little house she’s purchased sight unseen in the English village of Brixcombe, her very pregnant friend Elizabeth in tow. Celeste has created an elaborate fiction whereby Elizabeth is the wife of an absent sea captain (the putative purchaser of the house) and she herself is Elizabeth’s companion, Miss Smythe. In fact they are both courtesans, and Elizabeth is the mistress of a married man with whom she has a stormy, on-again, off-again relationship.

Celeste had a very unstable upbringing – her neglectful mother was a courtesan herself, and her father was absent. Her mother died unexpectedly when Celeste is 15, and she turned to the only way she knew of to make money to support herself. Now, some 18 years later, she is 33 and the toast of London – a very successful member of the demimonde. But Celeste is ready to give up that life – all the more so because she is concerned that Elizabeth is too flighty to care for her child once it’s born. Elizabeth and the child need her, so Celeste hatches the plan to give the three of them a new life.

Immediately upon arrival, the women discover that the house is really in no condition for habitation, and soon thereafter meet the seller – the Viscount Ashlin Lancester, Lord Trestin. Celeste and Ash tangle as he is immediately suspicious of the existence of the missing sea captain and horrified by the feminine assault (as he sees it) on his environs.

Ash has his own demons (and how – more on that in a bit). He is the guardian of his two younger sisters, both of whom chafe under his restrictive rule. Ash has been badly damaged by the scandal of his parents’ lives – his father was a notorious rakehell and his mother eventually shot her husband and then took her own life. Ash has decided to live his life with monk-like restraint, and hasn’t been with a woman in seven years. He has not found it that difficult to avoid the scourge of lust in his quiet village home – that is, until Celeste shows up. From then on, Ash is consumed by almost uncontrollable lust, as well as by doubts about the sort of women that Celeste and Elizabeth truly are.

So, right away, I had a couple of problems. One is the mental lusting – so much mental lusting. You have a character who is extremely buttoned-up and repressed, and you have reasons why he’s that way. Within minutes of meeting Celeste, Ash is imagining her in her bath and is appalled at his thoughts. I understand the appeal of having a character so overcome by attraction that s/he behaves and thinks in unexpected ways. (I’m actually reading another, very different book right now in which the characters are also beset with totally over-the-top attraction.) It just doesn’t usually work for me. I don’t find it realistic, or I find it hard for authors to convince me of it. It feels like an extension of what I think of as “-est” syndrome, which is rife in romance. He’s the richest, she’s the prettiest, they are the sexiest sexers who ever sexed. Maybe it comes down to too much telling and not enough showing. I would love it SO MUCH more if the hero maintained his staid disapproval of the heroine (minus the filthy thoughts) for at least a little while and slowly came to find that her charms overcame his reserve.

I think the other romance syndrome that is present here and that I don’t like is the whole “animal attraction” thing (so present in paranormals these days). I don’t find lust/attraction/love that just comes out of nowhere to be that romantic. I guess I want it to be a brain thing before it’s a loins thing. That’s not to say that I don’t ever want to read about h/hs who are attracted to each other from the get-go. But 99% of romance novels feature those, so I find myself thrilled at the 1% which don’t. And far too many of the 99% feature not just attraction but the sort of overwhelming, out-of-character, uncontrollable lust that bugged me in this book.

The larger issue for me was that the first, maybe, two-thirds of the novel – the parts that take place in Brixcombe before the action moves for a time to London – really dragged interminably for me. I can’t pinpoint quite why, but for some reason a couple of hundred pages felt like 1,000. I think I was reading the book for several weeks before I finally just made myself start to read more pages a day so I could finish the damn thing. Right around that time the book did pick up, but man, it was a slog before that.

I wanted to like both Ash and Celeste better than I did. He’s definitely been marked by the tragedies of the past and he tries hard to do right by his sisters, clueless to the fact that he is stifling them. Celeste has had a hard life and she’s also trying to do better, to help the sometimes recalcitrant Elizabeth and the baby that’s eventually born. Both noble but flawed characters, but neither ever really come to life. I thought there were missed opportunities for understanding between them. Ash has his judgments about Celeste’s past profession, but never learns the circumstances that forced her into that life. Maybe I should admire the restraint in not dragging out the angst inherent there, but dammit, I *like* my angst.

Ash really does seem to have some pretty fucked-up ideas about women and sex. His whole fear of turning into his father is turned on its head by a revelation late in the book that:

[spoiler]His mother actually cheated first; Ash’s father only started catting around in response to that. Which really didn’t quite make sense to me, since Ash’s father supposedly had a reputation for being a huge reprobate, and I started to wonder at the timeline and details of these events – how long ago had this happened, how long his father was screwing everything that moved, and why his mother killed his father, really? I mean, I guess it could still be because he was perpetually unfaithful, but given the circumstances, that seems a little hypocritical of her.[/spoiler]

The larger issue was that Ash never really dealt with the enormity of his mother’s actions, either pre- or post-revelation. Your mother committing murder-suicide is a pretty damn big deal, but Ash was more focused on the shame of his father’s sexual behavior and his own fear of falling into the same habits. He seemed to have a lot of shame regarding his sexuality and a lot of judgment towards sexually active women. While that may have been understandable (as well as historically accurate), it was still kind of icky to me.

And I know I’m picking on poor Ash at this point, but just one more thing – I felt like his characterization was kind of inconsistent. He had a pattern of being very proper and uptight (for the reasons already outlined), but occasionally, usually when Celeste would start to draw back – either out of prudence or because he’d hurt her -Ash would turn playful and teasing on her. It seemed out of character for him, to say the least, and it felt more like it was driven by the dictates of the plot (if she pulls away, he needs to be the one to bring them back together) than by his personality as it was generally presented to be.

There’s a subplot/sequel bait involving Ash’s childhood friend, who turns out to be a London friend of Celeste’s. For a friend, he is also very judgmental about the idea of Ash and Celeste getting together. Which, again, I suppose made sense from a historical-accuracy standpoint, but didn’t make me like the guy much, especially considering that he’s portrayed as something of a whore himself.

The writing was mostly competent, though I noticed a few rough spots, such as the anachronistic (I think) phrase “fallen for” (used both in the romantic sense and the being-tricked sense, in separate scenes), the hero’s definitely anachronistic use of “toxic” to describe the heroine when he’s angry at her, and the word “dawdle” used when I think “dandle” was what was meant (it involved “dawdling” a child on someone’s knee, which just didn’t sound right).

The Trouble with Being Wicked isn’t truly a bad book – it’s mostly just a bland book with a few problematic elements. For that reason, my grade is a C.