REVIEW: The Summer He Came Home by Juliana Stone

This is the first book in a series involving three childhood friends who reunite upon the death of one of their members. 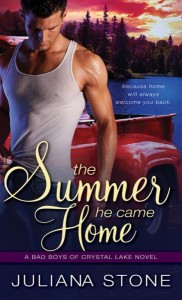 Cain Black is a former star high school quarterback turned down a full ride scholarship to Michigan State University to pursue his dream of music. He and his band are on the upward swing of popularity. However, Cain’s confidence is shaken when he has a falling out with the drummer of his band who was the cowriter of much the band’s songs. He returns home to Crystal Lake, Michigan to find himself and his music.

Maggie O’Roarke is a single mother working on a illustrated child’s book and cleaning homes for a living, much as Cain’s mother did before she married well. She’s got a big secret (although based on her behavior it is fairly easy to figure out what her secret is).

Cain’s motivations come off as crass and selfish in the beginning. Maggie is a single mother and doesn’t put herself forward as seeking out a fling yet Cain pursues her despite his mother’s admonition that Maggie needs a man in her life who will stay, unlike Cain who left ten years ago and is just now returning. Not only does Cain pursue her but he begins to take her young son on outings like fishing.

I always struggle with the plotline where the guy pursues a girl just for sex when she is looking for something more permanent and he knows it. It comes off as very self serving. Can’t Cain go a few weeks without sex while he is back with his friends and visiting his mother?

Maggie, too, seems a little cavalier with this new man spending a lot of time with her son and although she does, later in the book, hold up her son as an impediment to a relationship with Cain it has less to do with the emotional damage her son would suffer so much as the physical jeopardy being with a famous person would be.

I guess the justification is that neither can help it. Early on in the book, Cain describes Maggie as inspiring unheretofore unmatched feelings, supposedly to bless his pursuit of a single mother in the text. But his time with her up until that point is so limited, I wonder how he knows that the stirring in his groin is somehow related to his heart.

One part of the book that was mildly interesting was the issue of class. I would have liked it if Maggie were just a house cleaner instead of an aspiring children’s illustrator because it is Maggie’s position as a maid that some townspeople use to question why famous rock star Cain who was once married to a famous Hollywood actress. Maggie has feelings of inadequacy that she has fought from her first marriage to a rich and powerful man. That Cain’s mother married a wealthy man, the town didn’t really forget her menial past. While this issue didn’t spool out to its fullest potential, the light touch on the issue of class provided a little freshness to this otherwise predictable small town romance.

There are no real surprises in this book. There is a man hungry rich bitch, bad reputations to live down, stupid men to threaten, and endangered women to protect. Despite the familiarity of the story, is readable and appealing. For readers looking for life on the road with the rockstar, the story will not fulfill that interest. And although there are a few scenes of Cain and his band, this is a small town story and a celebration of the small-town community.

The friendship between the three surviving friends plays a large role in the story as each of them get opportunities to lay the foundation for their own stories including bereft widow as the object of unrequited love by the surviving twin; and the burgeoning billionaire with major father issues. C

→ Jane
Previous article: REVIEW: Skin by Kylie Scott
Next Post: Will eBook Adoption Flatten out at 30% of the Market