REVIEW: The Statistical Probability of Love at First Sight by Jennifer E. Smith

I wanted to read this book but waited until it was out of hardcover (the price was too rich for me in hardcover). While I liked the voice, my problem with this book was the same as many other reviewers’ problem with this book.  We spent 80% of the book listening to the resentful (and righteously so) thoughts of Hadley  about her cheating father and 20% recovering from it. 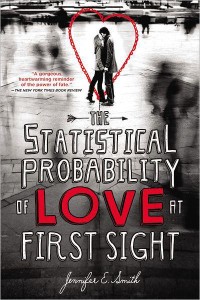 Maybe Hadley had a year to come to grips with the fact that after 17 odd years, Hadley’s father fell in love with another, much younger woman, while lecturing at Oxford but the reader has only about three chapters.  We experience her sense of loss, her mother’s depression and heartbreak, and her father’s physical abandonment for most of the story and then it seems that all she needed to do was be welcomed into the bosom of her step-mother’s family and all was well.  To say that the switch was abrupt is like saying there is a large body of water between the Eastern shoreboard of the U.S. and London.

The palette is supposed to cleansed, or at least eased, by the fact that Hadley’s mother is in a new relationship.  It’s details like that and the secret messages in the Dickens book her father gives her with passages underlined in pen that give the story a manufactured feel, not to mention Oliver’s existence.   I felt hostile to the conclusion even though I think I was supposed to be charmed.

Hadley arrives at the departure gate 4 minutes too late for her flight to London where she will attend the wedding of her father to this younger woman he fell in love with.  The next flight out is 3 hours later and places her in a seat next to a cute, tall British boy Oliver, who by his garment bag reveals he is going to London for an event as well.

The question of the book was about love but I never felt that it was interested in the ends of love, only the beginning.  Hadley and Oliver on the plane. Her father’s new love with Charlotte.  Her mother’s new love with the dentist.  There’s no permanency in any of the relationships depicted on the page.  Love is ephemeral, seems to be the unintentional message and while the book is supposed to be hopeful in a sort of love springs anew, I felt depressed at the end of it.

Hadley’s hurt at her father leaving her mother, leaving them goes unaddressed. His only answer is that he fell in love.  But he still loves her mother and still loves her.  Hadley’s forgiveness of him is because she thinks he looks right with his new bride?  It just doesn’t ring authentically to me.  In the chase for an uplifting ending, this book actually overreaches and heads the opposite direction.

The romance with Oliver is a throwaway. It’s superfluous and adds almost nothing to the story.  This is a story of Hadley forgiving her father rather than a lovely young adult romance.  I wasn’t sure what new understandings Hadley reached at the conclusion of the book.  Was it that love happens quickly but then fades just as quickly? That life is too short to be with people that you don’t love or that it is too short to hate people that you love?  Or was it just that I was to experience Hadley’s journey on the plane where she remembers her mother’s loss, her loss, and a couple memories of her dad being kind?  Hadley, that tingly feeling you got when you met Oliver? Those were endorphins and that feeling never lasts. Ask your dad.  C