This book was re-released by Harlequin Presents to look less Harlequin Presents-y and more upscale contemporary romance. The inside however, is classic Harlequin Presents. A young, down on her luck waitress slash potter spends a torrid evening with a wealthy Spanish billionaire only to find herself pregnant because neither of them use birth control during their one night of stranger sex.  Given that Leandro Carrera Marquez, Duque de Sandoval, needs an heir, he quickly decides that Molly the waitress will be his next wife. 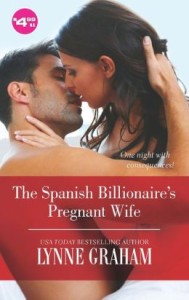 The opening of the story slides from interesting to embarrassing. Leandro is presented as a near god in his life, the patriarch of his venerable family. His clothes are laid out for him, fresh towels are brought to his toilette every morning, and as he descends the castillo stairs, he is greeted by no less than three of his servants.

Having been greeted by Basilio, his major-domo, and two maidservants at the foot of the stairs with much the same pomp and ceremony that the first duque would have received in the fifteenth century, Leandro was ushered into breakfast.

Yet when we move to London where Leandro meets our intrepid heroine, we are presented with clumsy head hops from character to character as well as rather forced physical attraction between the heroine and Leandro at a wedding reception that Molly is working. Consider the rather cliched line that closes chapter one after Leandro has been ushered out onto the balcony after interceding between Molly and three drunken wedding guests.

‘There were three of them and only one of you.’ Molly stretched up on tiptoe to brush her fingertips very gently over the darkening bruise forming on his olive skin. ‘You could have got really badly hurt and I feel guilty enough. I’ve brought you some food. Please eat something.’

‘I’m not hungry for anything but you,’ Leandro breathed thickly.

This was one book that I felt would have been better served if we started at the pregnancy than try to watch these two rather mismatched pair try to convince we readers that their lust was too strong to resist after a few glances across the canape tray, particularly given that Molly was a virgin.  Moreover, the invitation issued by Leandro after their one night together to become his mistress didn’t really match up with the cool headed, but bored banker presented in the opening pages.  Leandro, in particular, is kind of a bland HP hero.  He has some anxiety over his previous poor marriage and his wife’s subsequent death.

Molly was more interesting than the standard HP heroine.  She waitressed to pay for the bills but she wasn’t destitute.  Her pottery was something she was passionate about.  While she didn’t have family, she did have a few friends. In other words, turning down the mistress position didn’t mean she went without food and companionship.   Further, she’s always challenging Leandro, taking vocal issue with his presumptuousness, and refusing to simply be ordered about by him or intimidated by his wealth and title.

Leandro isn’t much of an asshole either; just someone used to getting his own way and being catered to. That part was set up nicely with just a few paragraphs in the opening of the book.  My major issue with this book was that the overly sexual tones of the book didn’t work for me because I wasn’t entirely convinced that these two were in lust.  In HP world, there is a fairly low doormat to asshole ratio and a high sensuality content. I can see why it was chosen for reissue even if the coupling of these two didn’t work for me. C