Earlier this year, I read and enjoyed your book about Nell Gwynn, mistress to Charles II, The Darling Strumpet. When the opportunity came to read a book about another woman in Charles’ life, I figured, why not? 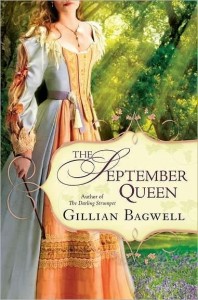 Jane Lane, like Nell Gwynn, was a real person. The romance between her and Charles as depicted in the book is speculative, however. There doesn’t appear to be any historical evidence of it, other than Charles’ prediliction for seducing every woman he laid eyes on. What is known is that when Charles was a 21-year-old monarch in name only, Jane and her relatives helped him to flee England after a disastrous defeat in battle. In the story, Jane travels with a cousin and Charles, the latter disguised as her groom. They become lovers along the way. Soon enough, they part, but after returning home, Jane finds that her part in Charles’ escape has become known, and now she has to flee England herself, an arduous trek miles on foot in the company of her brother.

I had several problems with The September Queen; the biggest and mostly persistently problematic was the character of Jane. Jane doesn’t have much personality, and her most marked traits irritated me, making her a fairly unsympathetic heroine in my eyes. When she’s introduced, she’s 25 years old, fretting over the lack of romance in her life. She’s pretty and of good family, so she’s had many marriage proposals (in fact, she receives another one in the first pages of the book), but darn, none of those guys excite her. I felt this was an attitude that was probably atypical of the era, and not one I have much sympathy for in a 25-year-old woman, even today. Maybe a 15-year-old, but not a 25-year-old.

Of course, once Jane meets Charles, she finds the spark she’s been missing all these years. Great. Good for her . She knows he can’t marry her – she’s not that well-connected – but she’s happy to just be a part of his life. Except, for the next decade, she’s a pretty small part of his life. They reunite in France and get busy again, but Charles has other things on his mind – chiefly a country to regain and other women (many other women) to bonk. It got to the point, about two-thirds of the way through, where I really felt that Jane needed the 17th century version of “He’s Just Not That Into You.” Jane just does not get it, though the signs are certainly there to see. Further, she sees other evidence that Charles is really quite an asshole (his treatment of his former mistress and mother of his child Lucy Walter appalls Jane), and at times it will seem like she’s through with him, only to have her mooning over him again in the next scene. This goes on for years. By the time they have their big confrontation, at the end of the book, I *almost* felt sorry for Charles; Jane seems more like a stalker than someone who had a legitimate claim on Charles’ attention and affection.

The second large problem I had with the book was the pacing. If this were a romance, and the characters not based on real people, I could imagine the first third being the basis for a good story. But because Charles and Jane are real people, and presumably the author didn’t want to go too far out on a limb in making things up, the last two-thirds are very static and, well, dull. Jane makes her way to the court of Princess Mary (Charles’ sister) in Holland and waits. And waits some more. For ten years. She sees Charles occasionally; he’s (relatively) poor and at the mercy of other European monarchs for both hospitality and potential help in retaking his throne. He sires some bastards; Jane sulks. Honestly, hardly anything really happens, at least in the story, in those ten years.

Again, because this is real history and not fiction, even the denouement of this decade-long holding pattern is anti-climatic. Cromwell dies (spoiler alert!), and the English sort of seem to decide that, sure, why not, Charles can return and rule them. I may have missed this part in history class because while I was aware that Cromwell died a natural death before Charles was returned to power, I didn’t realize that the Roundheads just sort of shrugged their shoulders and gave up (okay, I may be oversimplifying this a bit, but that’s how it appears in the book, anyway). Not only is this dramatically unsatisfying, but it contributes to the image I’m getting of Charles II as, well, a bit of a loser. I mean, I used to know him as kind of the fun king (“the Merry Monarch”) who restored the theaters to London and had a lot of mistresses. I’ve read three books featuring him this year, and so far I don’t have any greater insight into his personality (did he have one?). In this book he seems to forever be enmeshed in ineffectual plots to overthrow the powers in England that end up coming to nothing. It’s not like I’m so bloodthirsty that I think the only honorable or respectable way for Charles II to win his throne back would be on the field of battle, or that I want some historically-inaccurate Rambo-type action. But at the same time, monarchs are supposed to be masterful, and Charles doesn’t really come off that way at any point during The September Queen. If anything, he tends to portray himself as a victim of fate and outside forces as a defense against Jane’s whining about their not being together. This makes him seem like a typical sleazy lothario who doesn’t take responsibility for his actions or their consequences.

A minor problem I had with the story once the action moved to the continent was that a number of characters are introduced and frequently referenced – real-life royal relatives of Charles II – and darned if I could keep them straight. There was one Queen Elizabeth and one Queen Mary and a Princess Mary and a few others I never did manage to retain who they were or why I should care about them. A family tree at the front of the book might’ve helped.

The writing in The September Queen is competent, but competent writing can’t overcome large deficiencies in plotting and characterization. The book is readable, but that’s about it. My grade is a C.